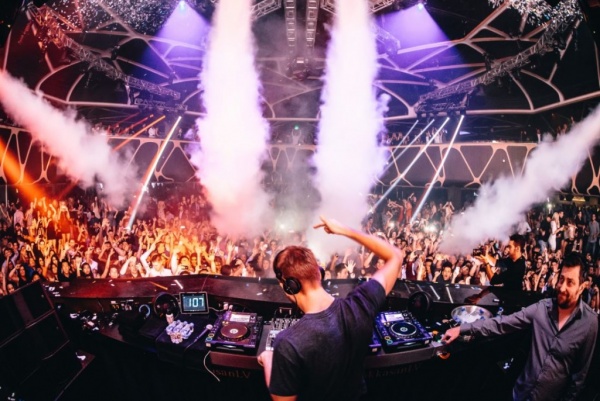 If you didn’t live under a rock this past summer, chances are you heard the inescapable pop hit, “Summer” the smash hit by Scottish DJ Calvin Harris. The song was the first single to his upcoming, hotly anticipated album Motion. Calvin Harris, who was recently named Forbes highest paid DJ of 2014, sort of has a reputation of being a pop superstar. With his new album, he has attracted some big names like; Big Sean, Ellie Goulding, Haim and John Newman. With the major success of his fist single, Harris very secretly released his second single “Blame (feat. John Newman)” days before it was supposed to be released, setting the internet ablaze. Harris proves that this star studded album is worth the wait, and this is coming from a person who generally abhors EDM and electronic music.

Motion is a long album, clocking in just barely under an hour, with 15 tracks. From a man, who generally makes a living sampling and playing other people’s music, it should be noted that Harris wrote all of the songs on the album, and the songs with guests on them those guests helped to co-write the song. As you have come to expect from the hit “Summer” Harris lends his very distinct vocals to most tracks, and gives a nice juxtaposition from the hard and very house-centric beats that he is producing. But where the album really shines is on tracks featuring more rock orientated bands/ people. Having that nice contrast in sound, creates such a great distinction that the sounds come together so well. The first track of note is “Outside (feat. Ellie Goulding)” Goulding is no stranger to the EDM scene, but her angelic vocals with the beats are such a highlight. In my opinion, this is one of the best songs that she has been on. The lyrics come together in a way that makes the whole song feel so polished. The next highlight on the album is “Blame (feat. John Newman)” Newman, a man  not dissimilar to  the insanely popular Sam Smith, is latching onto a fantastic EDM producer/ artist to create his own successful hit. Much like Smith’s guest appearance on Disclosure’s amazing “Latch”, the powerful vocals of the Brit shine in the track and the surge in popularity of EDM will make it an easy play for most radio stations and parties. Finally the track that I was most excited to hear on this album is the Haim collaboration “Pray to God” written by all members of Haim (Danielle, Este, and Alana) but the thing that I found most interesting about this track is that only Danielle is given credit for playing guitar on the song. But the layers of effects on Danielle Haim’s voice is a reminder of why Haim is one of the best up-and-coming acts in music. Unfortunately the other sister do not have vocal solos, but rather add background vocals to the song. But that is okay, the song rock, and it makes me want to dance. It is the perfect combination of rock and electronic music with that hint of pop. Also I just want to say that Big Sean’s song is everything that one can expect from a song with Big Sean.

Calvin Harris delivers on his new album Motion and the guest appearances help take the album to the next level. Where most albums seen to be maligned by the excess of guest spots, this one makes the most of the incredible talent Harris is working with. The album shines on the songs with the big names on it, but the ones that just Harris worked on create a nice contrast to the rest of the album, and Harris shows his true talent in making beats and songs that are fun to listen to and can be found easily on the radio, on your iPod, or at a party.