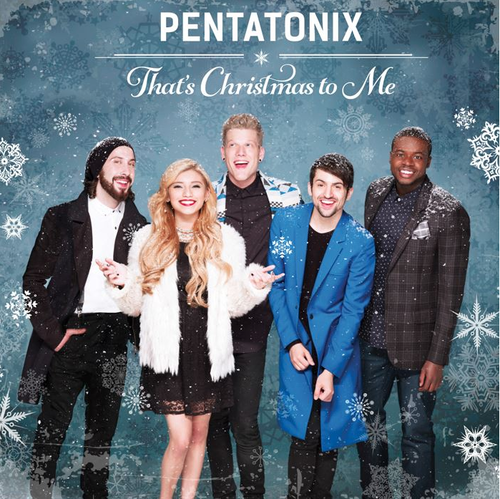 Fans of a cappella rejoice: singing sensations Pentatonix have returned with their sixth album (and second holiday album) That’s Christmas To Me. Capitalizing on what seems to be the “a cappella craze” that has swept pop culture over the past few years, Pentatonix rose to fame after winning the third season of NBC’s The Sing-Off. The group then signed a record deal with Sony Music Entertainment and enjoyed viral success posting videos of their songs on their Youtube channel.

Perhaps Pentatonix’s biggest success is their ability to attract listeners by putting a unique pop spin on a cappella, through both their pop/soul flavor and their choice to cover hit singles and well-known favorites. The group put out their first holiday album, PTXmas, in 2012, featuring a small 6-track compilation ranging from traditional Christmas favorites like “Angels We Have Heard On High” to more modern ones like “This Christmas.” With That’s Christmas To Me, their first full-length holiday album, the five-piece group delivers plenty more vocal harmonies and fun takes on Christmas classics.

The album begins with a rather austere version of “Hark! The Herald Angels Sing,” sounding more like a traditional choir of carolers than the upbeat pop sound for which the group is known. However, about a third of the way through the song, the group launches into Pentatonix’s signature sound. A raucous, soulful, hand-clapping chorus with a bit of a hip-hop breakdown towards the end helps put a fun and interesting twist on the classic carol.

This momentum continues throughout the rest of the album, with the five-piece group putting a soulful flair on old favorites like “Santa Claus Is Coming To Town” and “Winter Wonderland/Don’t Worry Be Happy.” Yes, you read that right: the latter track even features a mashup with the 1988 Bobby McFerrin reggae hit. Interesting choices like this showcase Pentatonix’s talent with traditional a cappella techniques, because, though the mashup is unexpected, it flows seamlessly.

The album offers some slower, more somber moments like “Mary, Did You Know,” as well as the group’s original song and the title track “That’s Christmas To Me.” With less of an upbeat sound, strong singing chops are essential to make these songs worth a listen, and Pentatonix definitely delivers. The final track on the album, “Silent Night,” is a peaceful, slowed-down number that leaves the listener on a soft and sweet note. The cover of the traditional hymn is simple, but polished, a good choice with which to end.

On the whole, Pentatonix delivers a holiday album filled with beloved classics that most fans of a cappella and casual listeners alike can appreciate. The group’s attention to detail is clear, as the vocal arrangements are clever and harmonious and flow well and ensure that there is never a dull moment. Most of all, even when working with songs as beloved and well-known as these, Pentatonix doesn’t compromise their pop flavor. Check out That’s Christmas To Me for a fun and innovative a cappella spin on the holidays.

Listen to “Winter Wonderland/Don’t Worry Be Happy” below: