An interview with Buddy from Favor the Brave 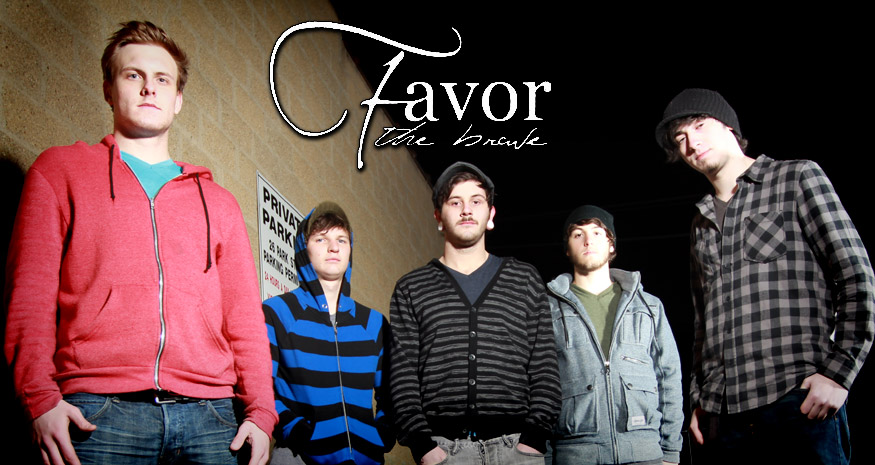 Favor the Brave is a Progressive Metal/ Hauss-core band out of Philadelphia, Pa. Founded in 2008, the band now consists of three original members: Chris Webb(vocals,) Matt Mieckowski(guitar,) and Mike Michvech(drums,) and the additions of: Lou Iatarola(guitar,) and Buddy Caine(bass.) Their debut E.P “Rochelle” was recorded and released in the winter of 2011, shortly after, the band was signed to Contorted Records. Favor the Brave has played all over the Pa tri-state area and New York. Some notable bands that FTB has shared the stage with are: Within the Ruins, Adestria, Erra, Wolves at the Gate, Belie my Burial, Sleep City, Die Atlantic and At Daybreak. That’s just to name a few. A quote from Favor the Brave: “We are always trying to outdo ourselves to make our music the best it can be and to always be original. Originality seems to be lacking in the majority of current music, so we’re looking to add some into the mix. Our dream is to have people listen to and enjoy our music. We all want this to be our full time job and be able to play for fans all over the world.” Favor the Brave is always working on new music and is looking to release some material in the fall of 2012. Get excited!

An interview with Buddy from Favor the Brave

SITR: How did the members of Favor the Brave meet?
Everyone in the band actually met in high school. We all went to Father Judge High School, which is a catholic school in Philadelphia. Throughout our four years there, our similar interests in music made us closer friends and we all eventually became part of Favor the Brave. The band was started by Mike (drums), Matt (guitar) and Webb (vocals) during our freshman year there. Lou (guitar) and myself *Buddy* (bass) joined closer to our junior year after being recruited from our previous band.

SITR: Who has ties to Penn State and how?
Me and Lou(guitar) are the ones associated with Penn State. We both went to the Abington campus, near Philadelphia, for two years. I went on to come to University Park this year, while he decided to attend Widener University, which is much closer to home. He is still a Penn State supporter though! Our other members attend: Temple University, CCP and Widener University. We’re all in our junior year.

SITR: How much does school interfere with the band’s collaboration and time to perform?
School, probably plays the biggest factor in how we function as a band, especially with me being so far from home. We would love to practice and perform non stop but we are pretty limited to playing shows on weekends and during our breaks. We also don’t really get to practice as a full band too much anymore, but we make it work by working on songs through webcams and sending each other recordings. We haven’t played a show during this semester yet and we’re getting pretty anxious to perform. Sometime during Thanksgiving break, we will be having a release show in Philadelphia for our new demo. We’re all really excited to play again and to get our new music out to everyone.

SITR: What do you make of the Penn State music scene? Any shows coming up?
Currently, I’m still discovering how the scene is up here. Reaching out to you, (State In The Real), has been my first attempt to broaden our horizons out here, other than telling new friends about our music. We’re always down to play a show anywhere where there are people who want to hear our music and support us. There may be a Favor the Brave show at State College in the next few months. Who knows? If anyone wants to book us, you can do so at: Favorthebraveinfo@gmail.com.

SITR: What is to come for the band’s music?
Progression. We are always looking to grow and develop as musicians. We want to stand out in the heavy music scene and put Philly metal music back on the map. We are always writing and we are diligently working on our new music! We think everyone will like what they hear when it’s finally released. I know we’re excited to get it out there. All of us want this to be our full time job. It’s what we’re all most passionate about.

SITR: What inspires Favor the Brave’s music? How do you come up with each song?
Our last CD, Rochelle, was a lot more personal than the new one. The new demo, Entropy, is basically about humanity destroying it’s self and how it rebuilds to face bigger intergalactic threats. It’s a pretty spacey concept album. The story and music are also largely inspired by a few of our favorite video games. We may release what games after the CD is released. Try and figure out which games they are and send us your guesses! The point of the new demo is to promote a full length album that we are currently working on, that will be recorded sometime in the summer of 2013.

SITR: What has been the one most remarkable experiences together?
I’d have to say getting signed was one of the most remarkable experiences we’ve gone through. It’s not a major label, but it’s still a step in the right direction. It’s an awesome feeling knowing that all your hard work has paid off and somebody wants to help you grow in the business. For me, since I’ve been playing in bands, I’ve wanted to be signed to a label, any label. Then in Favor the Brave, it happened. However, it didn’t feel like a huge accomplishment. It was a great feeling, but then it led us to have to look even further into our career and ask ourselves, what’s next? Also, traveling and meeting people that actually care about your music is an amazing feeling. That’s one of the best parts of performing in a band. Nothing will ever beat seeing/hearing people sing along with one of your songs.

SITR: If your band could choose to play with one other band, who would it be and why?
This is a pretty difficult question to answer. Our influences come from so many different bands, like: Between the Buried and Me, August Burns Red, The Devil Wears Prada, Within the Ruins, Protest the hero, and so many more. I think if we had to pick one band to play with, it would have to be Between the Buried and Me. Those guys are some of the most creative and original musicians out there and we have so much respect for them. Playing a show with them would definitely be unforgettable.We actually did just get to play a show with Within the Ruins though. It was pretty crazy getting to share the stage with a band that has such a heavy influence on us.

SITR: Typically girls like a guy who is in a band, has this posed true for the members of your band?
We have been through our fair share of ladies haha. Actually two members of the band, Webb and myself, have had the same girlfriends for awhile now and Mike just got into a relationship. Currently Lou and Matt are single though. So ladies, hit them up!

SITR: Is there anything else you would like to mention or make a shout-out about?
Our new demo “Entropy” will be released before Thanksgiving. There is currently a pre-order for it on our Big Cartel page. It only costs $3! We have released a single off of it called “Zero Gravity.” The link for the song is included below. Please check out our Facebook page. All of our music and information can be found there and that’s the best way to stay informed with what we’re up to. We’re always on our Facebook. One of our older songs, called “Forget” can be downloaded for free from our Reverb Nation page too. Also check out our Youtube account and our label’s website. Stay Hauss everyone and thank you!