An interview with Felix and the Fire Escape

I sat down with Isaac Bishop, guitarist of ‘Felix and the Fire Escape’, to have for an interview about their history and their newly released album, which can be purchased from any of the members, or at http://www.digstation.com/AlbumDetails.aspx?albumID=ALB000075603. Although the band probably won’t be putting on performances any time soon, they leave behind a legacy that original music at PSU will have trouble measuring up to for quite some time. Out of all the musical acts that 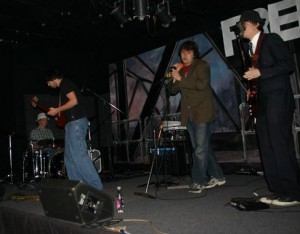 I’ve seen perform in this town, I don’t think I have seen any that enjoy what they’re doing as much as dudes Felix and the Fire Escape. If you have any money left from bender that ensued after your finals, I highly recommend this CD as your next investment. Buy, listen, enjoy.

What kind of music were you guys involved in before Felix?

-Kevin comes from a jazz-rock back ground, I think. Dev played in a metal band, and Pat’s played acoustic stuff for a really long time. I’ve never been in actual band but I’ve been playing guitar for like 10 years. I’ve jammed with people but nothing as serious as Felix, I come from more of a blues-rock background.

When/ how did all of you decide to join up?

-I joined the PSU Song-Writers club in fall 2009 and put out an offer to have a jam session at my frat. Among others, Pat Dan and Kevin all showed up, we kind of singled each other out as potential people to keep jamming with. We got to work on our first song and realized that we could probably get material together for an actual group pretty quickly.

How did you decide what direction you wanted to take the music into?

We all come from different musical backgrounds, but what made it work was the fact that we’re all into the same bands, so it ended up as kind of a melding of styles.

Were you trying to model yourselves after any bands in particular?

-The ones that we all shared an interest in were the Mars Volta, Rage Against the Machine, the Red Hot Chili Peppers, and early incubus. We weren’t really going for any one particular direction where we were like “this is what we’re doing and that’s it.” We really just kind of ran with the songs we were writing at any given moment.

Are the majority of your songs on the album?

-Yeh, we put like all of our songs on the album. We knew we weren’t going to sell a huge amount of the CD’s, because the project is ending, so in a lot of ways the album was just something to take with us to show for the year and a half of work we put into everything.

How long have you guys been working on the album?

-We knew we wanted it done before he end of the semester because Pat and Dev were graduating… we were originally pushing to get it done before spring break. We started multi-tracking, but it really just wasn’t going as well as planned. We met the guys from the Awful Dynne, and T. Ford Dycastro offered to record us with a different approach. We set up in his living room and recorded the whole album live in 2 days. Pats done recording on his own before but never a full band, so it just seemed like the best route.

Any feelings on the unfortunate end of Felix?

-It really does suck. From the start we knew it wasn’t going to be a super long-term thing, but I guess you can “know” something without actually realizing it.. It was also really stressful knowing that we had to get the album done while we were still all around, especially because this is the busiest time of the school year. Its not like I was ever dead set on the idea of us breaking into the big time, but the whole experience has just been a lot of fun and it sucks that it has to end.

-If there is a silver lining… I’m sure you know that around State College, you’re bound to play at least a couple of shows to a really small crowd of people. The fact that it was our last semester together also kind of meant that we knew our performances together were numbered, and it really kind of forces you to put everything you’ve got into each show. Our CD release and our very last show in Edinborough were amazing, we had so much energy for those.

What are your musical plans now?

-I’m going to be playing guitar in the Zach Zobel band this summer,  and I’m hoping to start up something with another friend next semester. I’m sure I speak for the other guys too, but once you start playing music you really can’t just stop. I’m not sure if Devon’s band back home is still together but him and Kevin both have a lot of friends who play music so I’m sure they’ll have no trouble getting something together. Pat has been putting a lot more focus into Felix than his acoustic stuff lately so I’m sure he’s going to be getting back into that, he’ll probably start up another project too.

– It is kind of exciting in some ways to get into something new, and think “What didn’t I do with Felix that I could do now?” But it the idea of having to learn how a whole other group of people operates isn’t exactly appealing. Like when you work with someone for a year and a half you kind of have things figured out.

As a pretty well established band in the area, what is your opinion on the Penn State music scene?

-Definitely a little disappointing. I came from a really small high school… but even the people who really annoyed you still listened to good music. I wasn’t expecting to come to such a huge place and see everyone listening to such a small amount of music…I’ve also never seen so many people so stoked to see a cover band. I guess the biggest issue is the lack of support from bars. We were lucky to fall in with the group of people that we did, obviously we played a whole lot at Casa Blanca, and the guys from Atlas Soundtrack were really good from us. They got us a show at Café 210, and that ultimately supplied the cash to produce the album. I guess all in all we’ve played some pretty crappy shows but we had a great time at all of them because we love what we do.

Do you have any advice for Penn State musicians?

– That’s a good question haha. Like I said, we got really lucky falling in with the people that we did. But I guess my advice would be if you really want to get something going, the people to do it with are here, it’s just a matter of finding them. There is incredible talent at Penn State.