An interview with Table Ten and their EP details!

Chris
Penn State News Reviews and Interviews
Comments Off on An interview with Table Ten and their EP details! 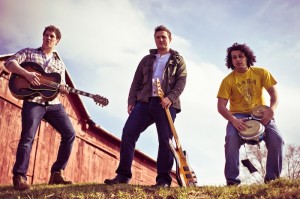 Josh Corcoran, Jared Stillman, and Antonio Parisi, collectively known as Table Ten, , have just hit the 1500 fan mark on Facebook, have been slated to open up for Rusted Root when they play Tussey Mountain on June 3rd, and are preparing to release their debut EP, entilted ‘Lift Me Up’ in June.

SR: What is the meaning of the your band name and how did it start?
Antonio: We don’t tell people this a lot, but it’s actually an anogram.
Jared: tall angry bears like eating
Josh: tacos every night
Antonio: …we started out playing open mic nights at Mad Mex’s taco night.
Jared: We were talking about the worst ways to die.
Josh: Yeah, and it was killer bear week on the discovery channel.
SR: Do you have any exciting news, goals, and/or accomplishments
Josh: We have our first original CD coming out in late May or early June, it’s called Lift Me Up and it will be on iTunes and on the road with us this summer. Also, we are opening up for Rusted Root, June 3rd at Tussey Mountain.
Jared: …and after having the iPhone for about a year I just figured out how to type in all CAPS.
Antonio: How do you do that?
Jared: Double tap the shift button.
SR: What has been the biggest inspiration for your band?
Antonio: Seeing Rusted Root at the State Theatre, they really made the crowd move. I’ve always been inspired by music but that moment really gave me an extra push.
Jared: Seeing bands live, especially three piece bands.
Josh: I grew up on Dave Matthews Band, watching how they interracted with the crowd and eachother. How Dave could work an entire stadium without saying much at all. Also, I’d say another a big moment for me was seeing Brett Dennen in Portland, Oregon.
SR: What would you say is the craziest thing you’ve seen on the road?

Antonio: I don’t know we’ve been so many places…
Jared: I saw something live in person while we were playing that I only thought I could see on a website.
Josh: I think we’re all still a little scarred from that…and another time in Wildwood we left a show and had our van swarmed, Beatles style. People were jumping on the sides, shaking the van, and screaming for us. It would have been cooler if we didn’t have to drive away ourselves.
Antonio: Our 74 year old next door neighbor ‘Pops’ came to our show on his birthday dressed in a Spiderman costume, got on stage, and then flashed the crowd. The next day we took him skydiving – he made it.
SR: If you had any real advice for any amateur musician what would it be?
Antonio: Get AAA if you’re on the road. ….and play every song with your heart and soul, even if you’re just playing for your dog.
Josh: The best advice I’ve ever gotten is to play each show like it’s a big opportunity, because you never know who is going to be in the audience.
SR: What lies in the future for your band?
Table Ten: A record deal, a world tour, an SNL performance, Grammy awards, a Weird Al parody, a guest apperance on Sesame Street, cover of the Rolling Stone, contributing to a Disney Cartoon soundtrack, winning an Academy Award for said contribution, getting invited to the White House and meeting the President, another world tour, alcoholism, a break up, solo albums, failed solo albums, bancrupcy, fake deaths, move to Morocco, interventions, a reunion, reunion album goes #1, another world tour, Rock and Roll Hall of Fame.
SR: Is there anything else you guys would like to say or make a shout-out about?
Table Ten: We are playing Mondays in Sea Isle,NJ at the Springfield Inn, Tuesdays at North Beach in Dewey Beach, Delaware, Wednesdays at Seacrets in Ocean City, Maryland, Thursdays at the Carousel Bar in Sea Isle City, NJ, and Thursday nights at the Deck at Holly Beach in Wildwood, NJ, select Saturdays in Sea Isle and Ocean City, and every Sunday night at Donovan’s Reef in Sea Bright, NJ… and don’t forget to check out our CD when it comes out – we hope it makes it into your summer playlist !

Table Ten – Water to the Sea by friendsoftableten