14 Reasons Why A Cappella is Acca-mazing 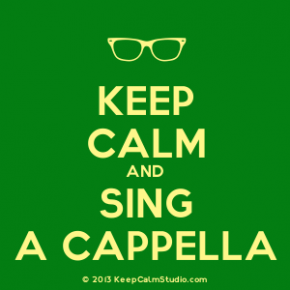 Yes, I know the title sounds cheesy.
But let’s be real, you and your friends have probably seen Pitch Perfect quite a few times; you might enjoy the sweet sounds of Pentatonix (read our album review here!); and you probably like to do your own version of a cappella singing when you’re alone.
(So here are a few reasons why a cappella is so great.)

1. A Cappella people are sexy

2. You know they can sing (hopefully!)

3. They’re always down for a good jam session

6. They bring back oldies and make them sound hip (remix)

7. Who doesn’t love a good beatboxer? (THEY MAKE NOISES WITH THEIR MOUTH)

8. If the need arises, they will serenade you to sleep

9. They are constantly thinking of how to turn favorite songs into a cappella versions

10. A Cappella dancing (the dramatic arm raises, and walking across the stage to show movement)

12. Great for any occasion (weddings, singing at your tailgate, parties, annoying your enemies, even falling down the stairs is musical)

13. You don’t need dancing ability to make it! (here’s looking at you awkward kids!)

If this list makes you feel like you’re ready to unleash your singing skills on more than just the inside of your car, then audition for one of Penn State’s many A Cappella groups!
One particular group, Shades of Blue, will be holding auditions:
Wednesday October 1st and Thursday Oct 2nd from 7-10pm in 301 Willard
*prepare 30 seconds of two contrasting songs

Here is a clip of them singing! 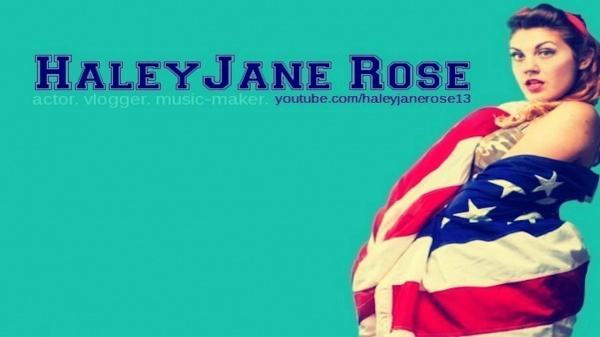 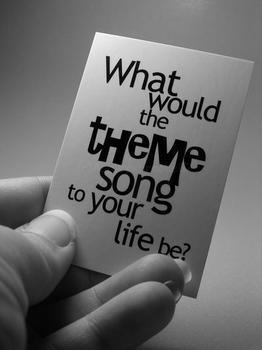 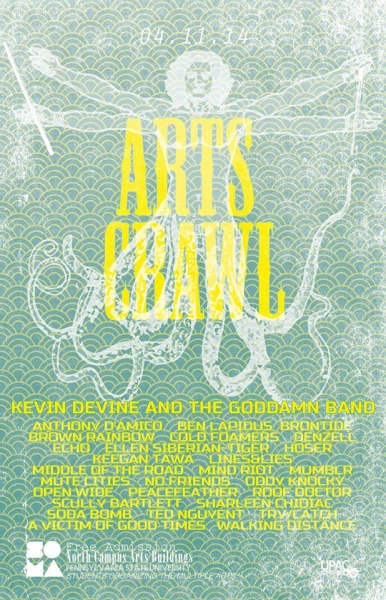 Update: SOMA has just announced Kevin Devine and the Goddamn Band as the headliner for Arts Crawl.

SOMA (Students Organizing the Multiple Arts) has revealed their list of openers for Arts Crawl 2014, a FREE event that includes many local bands, student art, film, and more.
SOMA has stated that the list may change, in the chance that any band drops from the festival.
Be sure to like their event page on Facebook, in order to keep updated on future festival information!
Until then, enjoy this amazing list of artists:

Kevin Devine and The Goddamn Band

Penn State A Cappella Group, Savoir Faire, To Open For The Sing Off Tour 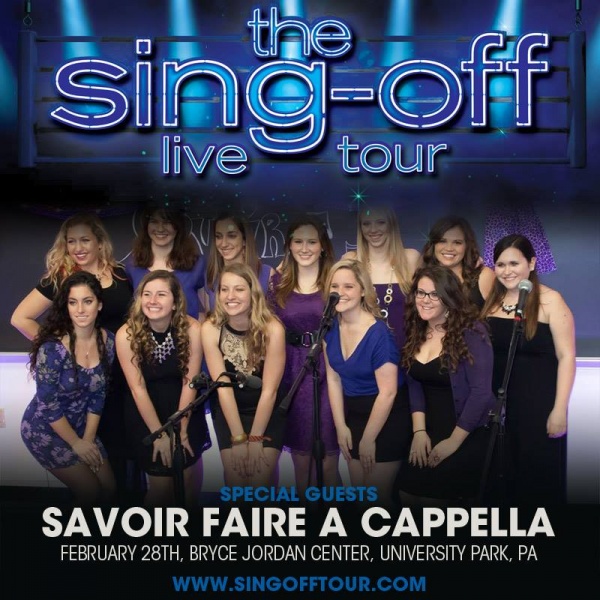 February has been a pretty good month for some of Penn State’s a cappella groups. The Coda Conduct won third place in the ICCA 2014 Quarterfinals; Shades of Blue won the Bryce Jordan Center’s Sing-off contest; and now all-female a cappella group, Savoir Faire, will be opening for NBC’s The Sing-Off Live Tour at the Bryce Jordan Center this Friday, Feb. 28. They will also be performing with the tour group March 1st at Theater of Living Arts in Philly

For those who don’t know Savoir Faire, they are the original all-female a cappella group at Penn State. They put together two concerts during the year (one in spring, one in fall), and work hard for each—rehearsing around twice a week for two and a half hours. In the fall, you can find them singing in front of the student book store during home football games, and they most recently opened up for the Mr. Engineering pageant benefitting THON.

I talked to Savoir Faire’s musical director, Dana Cinque, and asked her a few questions about the group and their upcoming performance:
1. How/when did you find out that you would be opening for and performing with The Sing Off Tour? . Over winter break, we were contacted by one of our alumni – her dad is a concert promoter who was helping to put together the Sing-Off tour stop in Philly. She asked us if we were interested in opening as a fun publicity thing, and naturally we freaked out and said yes. Meanwhile, the BJC was trying to have a Penn State a cappella group open for that show. They wanted to have all the groups on campus compete in a miniature sing-off for the opening spot, but I guess the logistics didn’t work out, and when they heard we were in talks for the Philly show, they offered us the gig! The BJC did end up having a virtual sing-off on their Facebook page for free tickets and a meet-and-greet with the performing groups, and Shades of Blue won that. I don’t know if we count as one of the performing groups, which is totally weird because we know a bunch of people in Shades and they’re amazing, but hopefully we’ll get to meet the Sing-Off groups as well!

2. What was your reaction?
When we found out about the Philly show, it was the Saturday after finals, and I have never seen our group text more active – this is the biggest gig we’ve done in years, and everyone is over the moon about it. I didn’t find out about the BJC show until a few weeks into the semester. I woke up to a phone call from the director of marketing at the BJC asking if Savoir Faire wanted to sing at the show, and I was so excited I couldn’t sit down for the next hour!

3. What is your favorite genre of music to cover?
One thing I love about a cappella is that you can take a song, reinvent it, and make it your own. Plenty of amazing artists have done that already, and we’re inspired by artists like Pentatonix, the Gardiner Sisters, and Peter Hollens. We did that with our Titanium cover two semesters ago – we slowed it down a little, changed the dynamics, threw in bits of Bulletproof for funsies, and gave it more of a driving vibe instead of its normal dance feel. It’s one of my favorite arrangements that I’ve done. These days our setlists have been a mix of Top 40 hits, 90s throwbacks, and a ton of Sara Bareilles, but we’re mixing it up more this semester.

4. What is your favorite song that you guys have covered?
You’d get a different answer from everyone in the group, but my favorite Savoir song is Demons by Imagine Dragons. We’re performing it for the shows, and the arrangement takes the song slower and gives the background parts harmonies to important lyrics so you really understand the meaning of the song. When we were fine-tuning it, we would sing it with the lights off so everybody could put their own emotion into it without worrying about what anyone else was doing – and it really made all the difference. I love Demons because we all connect to it in some way, and we’re able to really get into the song and create this amazing energy that makes us even better and reminds us why we love singing.

And in case anyone is wondering what The Sing-Off is, it is a singing competition like American Idol or The Voice, but with a cappella groups. This year’s tour will feature Season Four Winners Home Free and other finalists VoicePlay and The Filharmonic.
Home Free:

Amsterdam, and Their New Single "Nightlife" 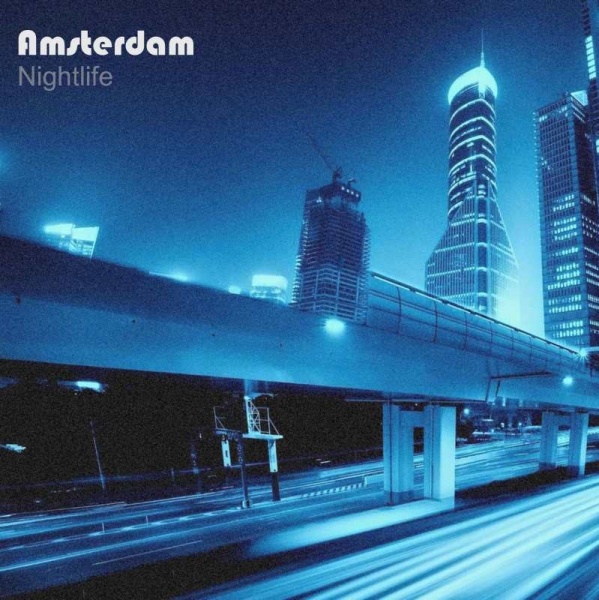 “Cold and tall surroundings” and a “seemingly endless supply of quality brews”, two things indie rock duo Amsterdam cited as inspiration for their newest single Nightlife. If you’ve ever had a day where it is gloomy and rainy outside and you decide to just sit indoors, relax, sit and listen to music: this song reminds me of that.

For those who have never heard of Amsterdam, they are a New York/State College based band consisting of Aida Mekonnen, who graduated Penn State in 2013 with a degree in Health Policy and Administration, and Tyler Ringland, who graduates this year with a degree in Chemical Engineering. Having been long time friends, they started writing and playing music together at 19. Amsterdam was a recreation of their former group Flashback Forward, who you probably remember from multiple shows and Movin’ On Battle of the Bands competitions. This time around, they say they’ve “switched to a more contemporary style, combining ambience with raw undertones.”

Nightlife is just one in the collection of songs Amsterdam recorded last winter at Wall Street’s Engine Room Audio—famous for clients such as The Killers, Depeche Mode, A$AP Rocky, etc.—in New York. You can download the singles for free via the band’s Bandcamp and Soundcloud pages. You can also follow Amsterdam and get updates through their Twitter and Facebook pages.