Typically Valentine’s Day is made up of cheap flowers and mysteriously flavored chocolate, mushy couples or lonely nights. However, this very lucky February 14th in 2012, we were all blessed with the greatest Valentine’s Day gift to date, the 2012 Bonnaroo Music and Arts Festival Lineup. Headliners will be Radiohead, RHCP, Phish and The Beach Boys (Yes, The Beach Boys). If that’s not enough to have you tearing up and ripping your credit cards out of your wallet, just check out the rest of the lineup. From your jam bands and instrumentals (Dispatch, Umphrey’s McGee, The Word, Big Gigantic) to your indie pop (Bon Iver, The Shins, Two Door Cinema Club). From your folk  and blues (The Avett Brothers, Kurt Vile & The Violators, Gary Clark Jr.) to your favorite hip-hop (Mac Miller, Childish Gambino, Blackstar, Ludacris, The Roots). Not to mention the electronica (Skrillex, SBTRKT, Major Lazer, Flying Lotus). It’s everything a festival freak could have dreamed and more. Tickets, as always, are a little pricey, approximately $230. However, I for one will have no qualms with working an extra shift here and there to pay for this once in a life time experience. We at STIR hope to see you there June 7th through the 10th. 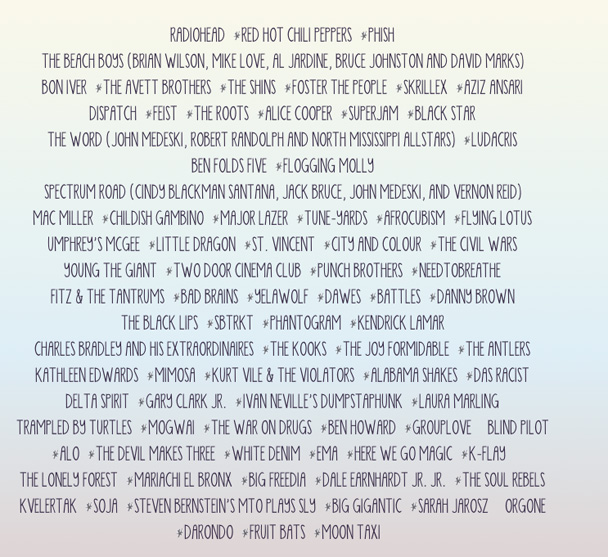