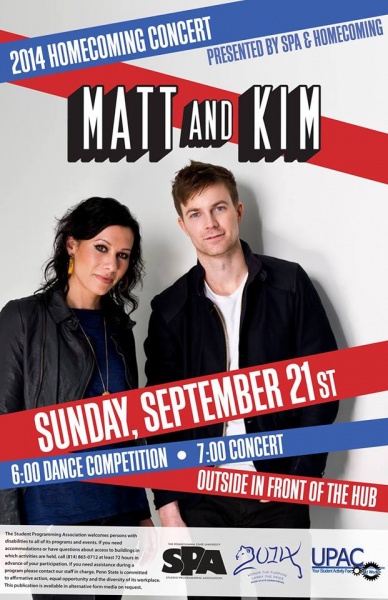 SPA and Penn State Homecoming and  presents the band Matt and Kim. The annual Homecoming concert will take place on Sept. 21 at 7:00 p.m. It will be an outside concert on Pollock Road in front of the HUB. This will be a ticketless event that is open to everyone. The Homecoming Dance Competition will take place at 6:00 p.m. directly before the concert beings.

Originating in 2004 in Brooklyn, NY, Matt and Kim met when they studied film and illustration at Pratt Institute. They got their start primarily through live shows and had the opportunity to play at well-known music festivals such as Lollapalooza and The Siren Music Festival. They have become well known for their live shows where fans have the ability to connect with the indie duo. After they signed with Fader Label they got high recognition from their music video for “Lessons Learned,” which was highly viewed on YouTube.  The song earned them an MTV Video Music Awards in 2009 for Breakthrough Video.

Since then, they have had songs featured on many hit television and late night shows such like Community, Entourage, Gossip Girl, Late Night with Jimmy Fallon, and Jimmy Kimmel Live!.