Chris Will
Mainstream Music, Music
Comments Off on Breakout Acts of 2013: MKTO 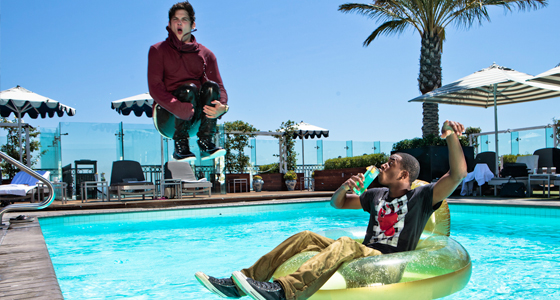 2012 was the year of the “new” in terms of pop music. Some of the biggest hits on the radio came from newcomers, revamping the very definition of “pop” with their own forward-thinking, gender-bending hooks. As 2013 hits the ground running, America searches for the Gotyes, the funs, the Psys and the Carly Rae Jepsens to cataclysmically detonate the charts once more. Enter Cali-bred pop/rap duo MKTO, made up of famed actors Malcolm Kelley and Tony Oller, and their debut single “Thank You.” What “Thank You” offers is more than just fresh, vibrant pop. The track is a rallying cry to the 20-somethings and teens of America, both a critical outlook at the older generations and a push of optimism for those young men and women struggling to thrive in our crumbling world. Kelley’s deft flow and Oller’s killer pipes deliver this message with ease and grace, and the powerpop production adds another layer of vibrancy to the track’s upbeat sound. Not to mention, the music video is a fantastically fun and creative visual to the song. “Thank You” serves as the first single to their upcoming debut Role Models. With a breakout this sturdy, expect to hear more from this daring duo in the very near future.