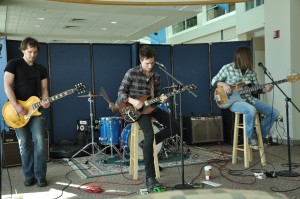 Readymade Breakup had an awesome performance at the HUB on 2/11/2011. The band is comprised of four really cool talented individuals, who sat down with us for an interview. Checkout the video (sorry for the not so great sound quality)… We hope they comeback in the near future! Make sure to check out their myspace too! www.myspace.com/readymadebreakup 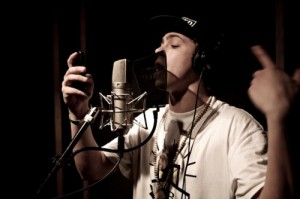 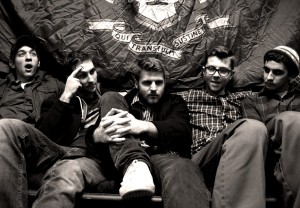 Brian: What is the meaning of the words “Hostage Calm?”

Hostage Calm: The term Hostage Calm comes from an unreleased Quicksand song. More specifically it deals with a moment of tension and period to be set free, and having an adrenaline rush as if you were captive. The other aspect of what Hostage Calm mean involves the world taking you at hostage.

Hostage Calm: We don’t write to the name of our music. However, we do have songs that involve various chord changes that depict the horror of the music that we try to illustrate.

Brian: Why did you guys make the change from hardcore to a new scene?  It appears that your current album is much different from what you guys have done in the past.

Hostage Calm: We found that we rds grew up on a punk scene,and it was something that we were very comfortable with. However, we tried to create and shed something that we liked , froma medley of music, but still growing strong to a Punk Scene.

Brian: What are your insights towards tonight’s show?

Hostage Calm : I like the fact that there is a mixed bill tonight, it shows that different people can come here tonight to enjoy various forms of music.

Brian: What is your advice to getting your music out there?

Hostage Calm: Give out your music to as many people as possible, and speak to what is important to you, and try to play where people listen. 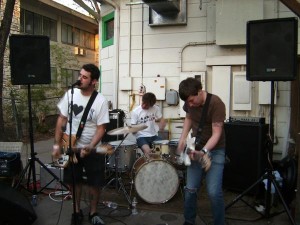 Brian: What would you say about the name O Pioneers and where did it come from?

O Pioneers: There was not any purpose to the name O Pioneers, but it actually refers to a music scene that has been outdated, just to be catchy.

Brian: What would you say about your music, writing, and style?

O Pioneers: The common theme with the writings of the songs that we write involve an understanding of what darkness and the boring aspects of life.

Brian: What would you say has been one of your biggest most recent accomplishments have been?

O Pioneers: Being able to collaborate with a Canadian band called Junior Battles. They were able to work on some music and also we would like to work on having the same acknowledgement as a band such as Streetlight Manifesto .

Brian: What are your insights towards Tonight show?

O Pioneers: We feel that this is a pretty normal house show, seems like the people here are very welcoming and open to hearing new types of music.

Brian : What is your advice to any amateur musician?

An exclusive video interview with Icarus the Owl & Chasing Capulet

Checkout their music video below.

A review of Street Light Manifesto and Go Go Gadjet

Streetlight Manifesto and Go Go Gadjet review and video of their Penn State musical performance on 2/7/11.  Read and view on.

So maybe you couldn’t attend the Streetlight Manifesto show or you just didn’t want to, but you should have.

First off, Go Go Gadjet opened up for Streetlight Manifesto, and what a terrible job they did.  Go Go Gadjet proceeded to play covers of all frat songs.  They must have come to Penn State thinking their crowd was going to be a bunch of bros and frat rats stopping by before their highlighter party.   Go Go Gadjet proceeded to play; Pink – Raise Your Glass, Taio Cruz – Dynamite, Neon Trees – Animal, and many others.  They eventually threw out glow sticks to the crowd, which resulted in the crowd throwing them right back at the band.  There were many middle fingers and “boos” being exhibited.  The crowd was as stiff as the hairs on the back of my neck after a near death experience. I was soon relinquished from death thanks to Streetlight Manifesto reviving me with an outstanding performance. Not saying they are a bad band… but Go Go Gadjet should have reevaluated who they were going to be playing for so they could cover more relevant songs for the concert.

Thanks SPA for Streetlight Manifesto, they were terrific. The band played song after song without the slightest let up.  The crowd was insane, finally letting loose having a chance to endure an exceptional performance.  The band played in amazing unison and constantly acknowledging each-other with smiles and gestures as if they were best of friends, who finally were at a show they had been waiting a lifetime to play.  The energy they gave off was in such high spirits, which is exactly how the crowd felt in return.  You honestly had to be there to truly understand why this band had turned down interviews from the Collegian and Radio 94.5. Since you couldn’t be there… I brought back some video footage for everyone to enjoy. 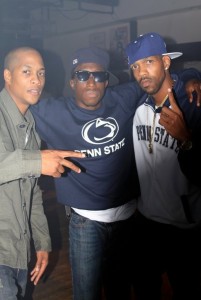