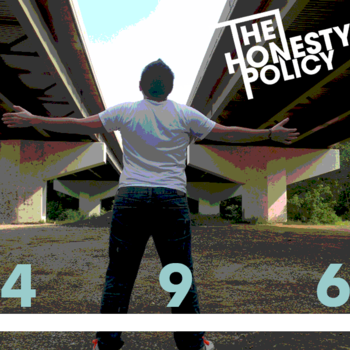 Sam Christie-Sgro, a PSU alumni who studied IST, has been playing music from age 11. With inspirations ranging from Blink-182 to Bruce Springsteen, “with a dash of hip-hop”, Sam started off as a drummer, and eventually picked up guitar. After playing the Bamboozle Music Festival with his high-school band, Counterfeit Pennies, Sam enrolled at Penn State where he met fellow musicians through the PSU Song-Writers club, and broadened his musical writing ability through poetry, writing, and recording classes. The end result of one of those recording classes was the 496 EP, Sams first solo release under the moniker Honesty Policy which can be downloaded for free here on his bandcamp: 496 EP . Sam will soon be in sunny San Diego California working with a music-centric company; Bands In Town, and working on his next album, to be released on Spotify, iTunes and the whole shebang. Sam said to expect “more story-telling type songs, I’m getting super into that through Springsteen and some older rock n roll… I’m kicking around the idea of writing different types of songs constantly, just to keep pushing the limits of my songwriting ability ya know? you can’t stay stagnant, you gotta keep writing and changing things up ya know? Never settle.

For any fans of Brand New, Jaw Breaker, Third Eye blind, or bands of the like, I highly recommend giving this artist a listen. The Honesty Policy’s raw sound is taking indie music out of the Cadillac commercials and back to its roots.

AND, check out his new independent music video.