Concert Review: Chords for a Cure 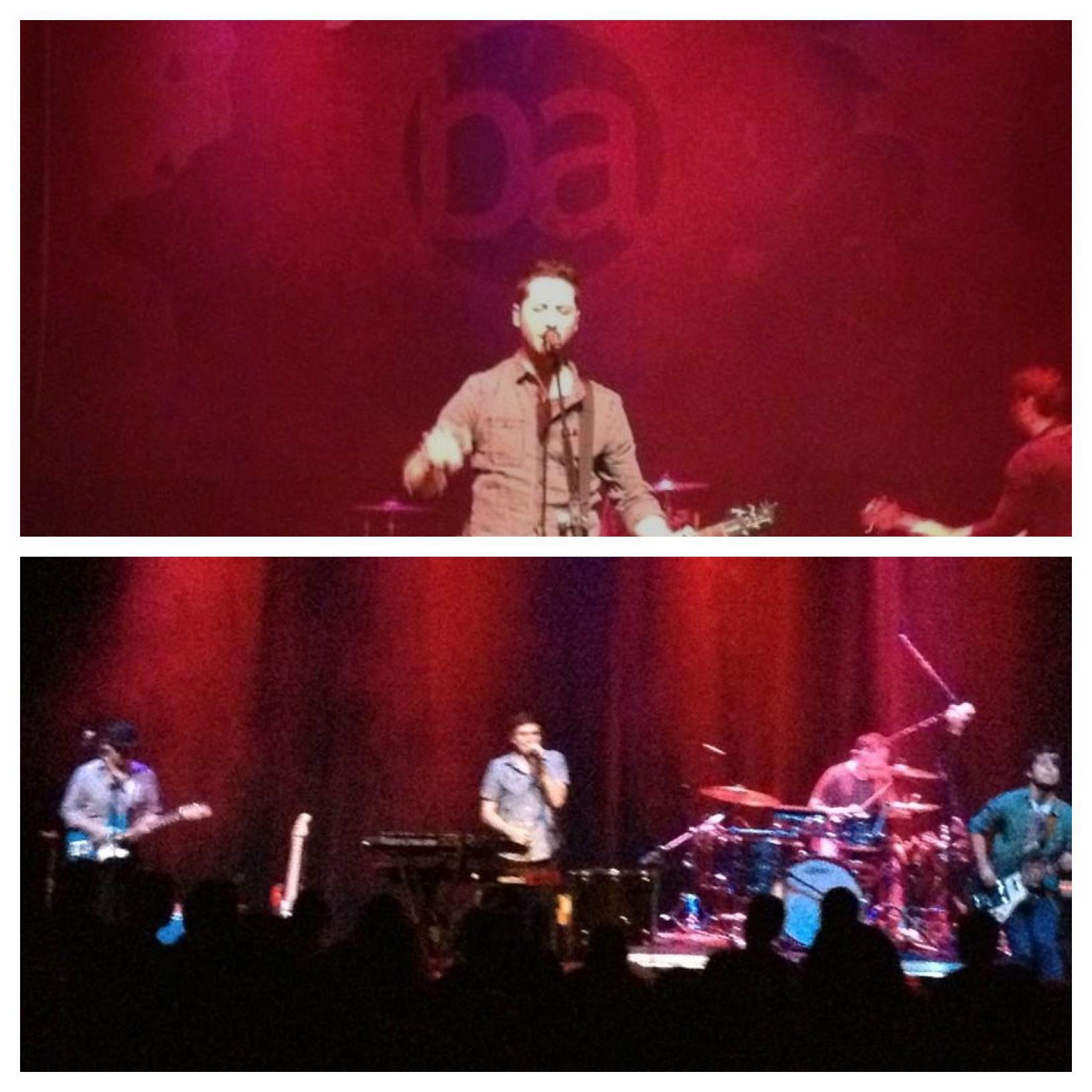 On Saturday, January 19th, 2013 the Eisenhower Auditorium rocked out to the sounds of WALK THE MOON and Boyce Avenue for THON’s first ever benefit concert.

After purchasing my tickets as soon as they went on sale, I had my front and center seats waiting for me when I arrived at the venue. Eisenhower Auditorium is one of my favorite places on campus to see live musical acts and distinguished speakers, with thousands of seats available in the orchestra pit or one of the two levels of balcony seating.

WALK THE MOON was the first act to walk on stage and, as a huge fan, I was super excited when they played their traditional opening song “The Liftaway”. This song is not on their more popular self-titled album, but can be found on their independently produced debut album I Want! I Want!. Nicholas Petricca (lead singer, keys and floor tom enthusiast) revved the audience up with a heavy dose of synth sounds which held true to the electro-pop sound that makes this band so catchy.  If you missed the concert and want to get an idea of how to properly open a concert, watch the live video below of the band performing “The Liftaway”

The second track that the band performed was “Lisa Baby” which can be found on both I Want! I Want! and their self-titled album. With lyrics alluding to getting hung up on a girl at the young age of twenty, most of WALK THE MOON’s songs target the college aged crowd.

“Next In Line” followed shortly after, which gave Nicholas a chance to go crazy on his notorious drum that never leaves his side at shows. At this point, the crowd couldn’t get enough of the band’s quirky little dance moves, or the way that Kevin’s (the bassist) notorious curly locks bounced around on stage. It was clear that WALK THE MOON won their audience over early in the night.

Other memorable moments from the concert included the “Mario Theme” intro that Eli (guitar) used to transition effortlessly into one of the bands racier songs “Shiver”. With lyrics that include “marks up on my neck” Nicholas (lead singer) was woo-ing all the girls in the audience with his trademark “hips don’t lie” dance behind his keyboard.

The band gave a heartfelt shout out to THON stating that they were “Upset they couldn’t make it to the Dance-a-THON” but dedicated their cover of David Bowie’s “Let’s Dance” to all those dancing at THON.

The band also used the opportunity to promote the release of their EP Tightrope, which was released today on iTunes, and performed a few tracks off of that. The single “Tightrope” may sound familiar to anyone who has watched the HP commercial for their latest laptop.

WALK THE MOON slowed things down for a second in order to allow screaming fans (aka me) to catch their breath, only to completely take it away again during an out of this world performance of their song “Iscariot”.

The band picked up the pace again by performing “Fixin’” which Nicholas once again belted out flawlessly while banging on his drum and swaying his hips to the song. The next song “Jenny” was a crowd favorite that had everyone jumping up and down. If you stood still for a moment, you could feel Eisenhower Auditorium shaking.

By this time, the entire band was covered in sweat from dancing, playing, and singing their hearts out on stage. The next to last song was one that I know the lead singer Nicholas holds dear to his heart. “I Can Lift a Car” is his favorite song to perform live. With lyrics that everyone can relate to, the lead singer tells a tale of a failed relationship, the feeling of almost losing yourself, the importance of feeling strong as an individual, and then moving on to finding new love.

The band closed their set with the fan favorite “Anna Sun”, and coming from someone who has watched their catchy music videos, live performances and interviews on YouTube over and over again, there is nothing like seeing WALK THE MOON perform “Anna Sun” live. The band gave their last song everything they had, which ended up being slightly damaging for the drummer, who at one point got hit in the face by his boom mic, leaving a mark that he later posted a picture of on Instagram.

After the band left the stage, it was clear that the audience needed the half hour break between sets to rest from dancing their hearts out to the catchy electro-pop sounds of WALK THE MOON. As someone that was hooked to the band after only discovering one song on YouTube, I can guarantee their contagious sounds will start spreading around to Penn State parties like wildfire.

It was clear from the way the crowd reacted to the lights dimming for the second act, that most people were there to see the YouTube sensation Boyce Avenue. The three brothers Daniel, Alejandro, and Fabian Manzano, were made famous by their acoustic covers of all different genres of music on YouTube. But after seeing them perform their originals live, I am now a converted fan of their original music.

Boyce Avenue’s lead singer, Alejandro, was the one who jump started their career by singing his heart out on YouTube. Using the money and popularity they received from being one of YouTube’s most popular channels, they turned their focus to putting out some of the most heartfelt songs I’ve ever heard.

While it was clear most people were there for the cover songs the band performed, which included Rihanna’s “We Found Love”, Adele’s “Rolling in the Deep”, Taio Cruz’s “Dynamite”, and, my personal favorite, Tracy Chapman’s “Fast Car”, there were still fans there that were singing along to some of their originals.

Some originals that stuck out were the ones that had stories behind them.

“Briane” was a song that the crowd really quieted down to listen closely to. The song was written about the band’s close friend’s wife who took her own life. The lyrics in the song were meant to reflect what the brothers believe she would have said to her husband.

“Broken Angel” was another song with a deep meaning that really resonated with the crowd. The band was inspired by a close friend who turned the negative aspect of her life’s hardships into a positive by helping other young girls.

Boyce Avenue appealed to all the single hopeless romantics in the crowd by performing a song they wrote called “On My Way,” which was written about how they believe that everyone has a soul mate, and that all the events that happen to you in life eventually bring that person to you.

As a musician and member of Penn State Songwriters’ Club, I was blown away by the bands’ ability to write songs from their heart. I was also blown away by the amount of extremely impressive equipment that the band had on stage. At one point, Daniel switched from one acoustic Taylor guitar to a different Taylor acoustic guitar. Most musicians are lucky to own one of those in their life.

Overall the concert was a huge success with both bands bringing something special to the stage. While WALK THE MOON had people up on their feet dancing the entire time, Boyce Avenue gave the audience time to reflect and think on their beautifully written originals, and sing along to their perfectly crafted covers. I can’t wait to see what kind of line up THON will put together for next year’s Chords for a Cure.