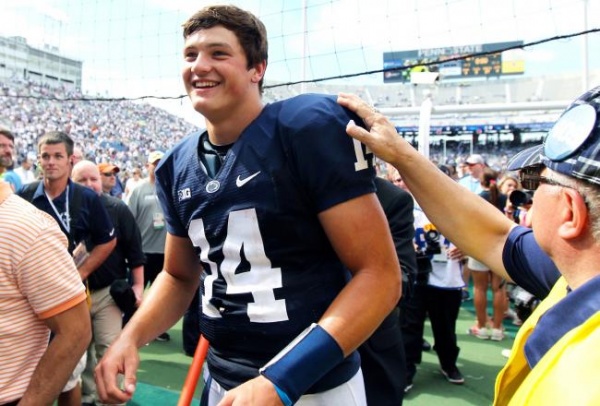 The Nittany Lions return to home turf this weekend after a thrilling last second win against UCF in Ireland. One of the biggest factors for the squad is sophomore quarterback and team captain Christian Hackenberg. We all hope C-Hack can lead the squad past Akron for a win so SITR took the liberty of making a pre-game playlist for the young gun slinger.

Drake did numbers this summer with a slew of bangers. One of our favorites was “0 – 100/The Catch Up”. It captured the confidence and genuine passion within Drizzy’s OVO movement. We’d like to see that same aggressive attitude in Christian Hackenberg’s eyes as he marches downfield. Let’s see you break another record young man.  If he ain’t the greatest then he’s heading for it!

Everyone needs a hype song to get going when you’re sitting restless in the locker room before kickoff. EDM maestro Yogi knows “hype” and produces three minutes of it with the help of bricklayer Pusha-T. The chorus rolls on, “I came, I saw, I conquered, I balled”. Hackenberg has no choice but to put up numbers when he comes out of that tunnel at Beaver Stadium.

The fast talking Atlanta trio make our heads spin with their rhymes. Does anyone know what they’re saying? Yeah, that’s what we thought. Linguistics aside; Migos get things going. Things get epic when Migos put on. #14 will put in in drive with this one.

Team insiders say the first score of the game will be accompanied by a squad shmoney dance session. Okay, maybe we made that up but it’d be cool. In the event that Hack hits his shmoney dance after a TD we can only hope he spurs a stadium wide flash mob-esque response. *Penn State hats fly up and never come back down*

Scandanavian imports Nico & Vinz did something right with their hit “Am I Wrong”. The duo sing about breaking out of the crowd, doing your own thing, and reaching for the top. Hackenberg is an ambitious student athlete with a unique skill set. Things may get tough come game day but he should shrug detractors and keep it pushing. How’s the saying go? Oh yeah, “Haters gonna hate, Staters gonna State”!