Last Thursday, I anxiously walked into Starbucks for my first interview representing State In The Real.  I found three members of Port Vue already there waiting for me, Joe, John and Scott.  As we sat down I could feel the great excitement in the air, as it was their first official interview as well.

Port Vue, five guys from Pittsburgh just breaking into the Penn State Music Scene, all met several years ago at Serra Catholic, a small private high school in the Pittsburgh metropolitan area. It all started during lead vocalist Joe Penzelik’s sophomore year of high school.  He was looking for other musicians and found Ben Sudie, a skilled pianist from age six, turned guitarist in high school.  The two formed together and frequently jammed over their favorite artists.  As the jam sessions progressed, Mark Shively joined, adding his jazz-influenced bass to the sound.  John Waiter made a fantastic addition, and became the lead-arranger for the group’s originals.  In desperate need for a drummer, one night over Xbox Live, Scott Stonebraker mentioned he played drums, they immediately invited him over to play and he fit right in.  Over Summer 2011, Port Vue was finally established and ready to take on Penn State in the fall.

The way Port Vue blends their member’s interesting sounds and backgrounds into their playing and music is truly incredible.  Their fusion of folk, rock, jazz, and more make them such a diverse group that reaches a wide audience.  As I spoke with them more I learned their inspirations, crazy band names, laughed over stories along the way and most importantly realized that Port Vue will soon make their impact on Penn State. 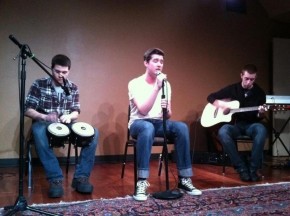 SITR: First, I must ask… I noticed in your performances and videos on YouTube , you’re missing Marc and Ben, are they still part of Port Vue?  Will we see more of them soon?

Port Vue: Yes, they are most certainly part of Port Vue.  Mark Shively goes to Greater Alleghany where he is completing his Engineering degree and Ben Sudie is currently studying at Duquesne University in Pittsburgh.  Yes, over spring break we plan to all get together and record as a group.   We’re really looking forward to that.

SITR: Give us some background on Port Vue. How did you meet each other and start making music?

Port Vue: We all went to Serra Catholic, small high school outside of Pittsburgh.  We started with just Joe and Ben sophomore year.  We were a jam band for the first three years and then finalized the line-up during Joe and John’s senior year of high school. (2011)

SITR: How were you inspired to start playing?  Is anyone in your family or someone close to you involved music?

Joe: My Dad and I used to listen to classic rock together and my Mom got me into country.

John: My Great Uncle played trumpet in a jazz band.  He wanted to pass it along to someone but I wasn’t really interested, now that I’ve tried other instruments, this is something I’d like to learn.  My Dad was very into Van Morrison and Pink Floyd so we often listened to their vinyls together.  I finally started playing when I was about thirteen.

Scott: Like the other guys, my Dad and I used to listen to music together too.  Then in grade school I picked up the trombone, however, I originally wanted to play drums, but the band needed a trombone so I just went for it. I now have picked up drums and guitar

Ben: Ben started piano at age six and then picked up guitar in high school.  We once got him to play harmonica for a song, he was great!

Port Vue: The versatility between all of our training and attitudes toward trying new things allow us to experiment with the music and produce great stuff.

SITR: Based out of Pittsburgh, what was your favorite venue to play?  What would be your dream venue to play in State College?

Port Vue: Our favorite show was definitely playing Dam Jam, a music festival in the Laurel Highlands.  Actually, Ben and Joe formed just so they could play this show, and now its grown into an annual thing.  It’s kind of fun since were always the youngest who play.

John, On his dream place to play: Honestly, anywhere.  However, if I had to choose, I would love to play the pavilion theatre on Shortlidge and Curtain.  I don’t even know if they hold shows there, but if they did, that would be ideal for us to play a small acoustic set. 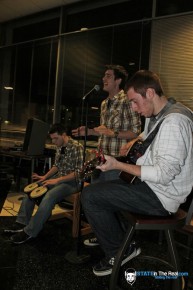 SITR: What are your main inspirations?

Scott: As far as drummers, the late “The Rev” also known as Jimmy Sullivan from Avenged Sevenfold.

John: The Gaslight Anthem is my favorite band.  They have such a unique sound to them.  They definitely were a big influence on my song writing.

Joe: I’ve had a lot of inspirations.  In grade school Green Day was definitely my favorite and in high school I really got into punk/pop, folk, and acoustic.

Mark: Mark had a big jazz-influence on his bass playing, he plays a good funky bass.

Ben: He definitely listened to some metal. (They all chuckle)

SITR: If you could open up for any artists at Penn State, who would it be?

Port Vue: We would love to play with Runaway Heroes, The Wondershop Showdown, My Zero Hero, Free Rollercoaster.  We really love all the bands here at Penn State, there is such a huge scene that gives us a lot of opportunities.

SITR: Can we expect any other big things from Port Vue for 2012?

Port Vue: Yes, we plan to record over spring break and summer.

SITR: Where can we catch shows of yours?

Port Vue: We have nothing planned yet, but if there are any open spots, please contact us (portvueband@gmail.com).  We’re open to playing anywhere.  If we don’t have any takers we’ll definitely be doing some Open Mics.

SITR: Any background story on the name “Port Vue”?

Port Vue: Yes, it’s quite a long story but it all started with Joe, Ben and their friend George.  We first called ourselves “A Little Sketchy.” We didn’t have a bass back then. Then we switched to “All the wrong reasons” just cause we really needed a band name. So then John entered the band, and we asked him to play drums even though he never played.  He was great and we started learning a lot of covers, so we called ourselves, “Saturday Night Covers.”  Still short a drummer, one night on XBox Live, we discovered Scott, talking about how he played the drums.  So we just went for it and invited him over for band practice.  Scott was incredible, so now we really just needed a name.  “Port Vue” is the name of Ben’s hometown, and where Scott, Mark and Ben went to grade school.  Honestly, its  just a small town with not much there.  But it reminds us of our youth so it just fit.

SITR: Any fun stories or rehearsing together?  Your first time playing for an audience?  With five people, how do you handle mistakes during performances?

Well our favorite practice was when we all got “Red Solo Cup” on the first try.  It all just came together and that’s when we knew we had something special. (They’re planning on uploading the video of them playing to YouTube soon)

Port Vue would like to publicly thank The Songwriter’s Club and the connections they’ve found through them. As well as the other musical clubs on campus that have helped moved them along.  “We wouldn’t have gotten this far without coming to Penn State.”

Over the next few months Port Vue is working on bringing all their YouTube videos to full-band and starting to record.  Port Vue is looking to play shows in the State College area.  To hear more about Port Vue, check out some of their videos, or contact for booking please see below:

If you’re an artist in the Penn State community and would like to request an interview with State In The Real please contact via the “Contact Form/Button”.