Concert Review: Chiodos, Emarosa, Our Last Night and '68 "Start Over" at The Trocadero

Eric Poluhovich
Mainstream Music
Comments Off on Concert Review: Chiodos, Emarosa, Our Last Night and '68 "Start Over" at The Trocadero

I was lucky enough to attend and take pictures at the April 19th show of The Devil’s Dance Tour at The Trocadero in Philadelphia on April 19th. The tour featured ’68, Our Last Night, Emarosa, and headliner Chiodos.

The Devil’s Dance Tour should have been called The Tour of New Beginnings. Maybe it doesn’t have the same ring (or alliteration) to it, but it’s the truth. Within the past year, every one of these bands has undergone some kind of major change, and have essentially had a new beginning.

The opening band, ’68, is Josh Scogin’s new band. Josh Scogin is known as the vocalist, founder and only consistent member of The Chariot. In the 10 years that The Chariot was a band, they slowly but surely gained a considerable and loyal following, but the band called it quits after a farewell tour late last year. ‘68 is somewhat of a departure from Scogin’s last project, but you can certainly tell where his roots are. The band is similar to a harder-hitting version of The Black Keys, but you can hear some similarities to his work in The Chariot. Josh Scogin has taken on both vocal and guitar duties in this band, while Michael McClellan hits hard on the drums.

Unfortunately finding parking was an issue, and I only caught the end of the set. But the band makes it obvious that they are not to be taken lightly, even with only two members. Their personal style of hard rock is loud and aggressive, and Josh Scogin still finds a way to rock out, even when constrained by a guitar and a mic stand. This is Scogin’s new beginning, and ’68 seems to be on their own unique path, finding their own niche in the scene.

Following ’68 was Our Last Night. Up until 2013, the band had released almost all of their albums under Epitaph Records. Last year, the band decided to change how they were going about their careers. First, after releasing a cover video of Adele’s “Skyfall,” the band started releasing covers of Top 40 hits on YouTube for their “Summer of Covers” series, with considerable success (they released their cover of “Dark Horse” by Katy Perry less than three months ago, and the video has nearly 1.5 million views). After reaching a new group of fans, they decided to go independent with their releases. They launched an IndieGoGo campaign to fund two EPs, one of which came out late last year and the other which is still in the works.

The band took the stage and opened their set with their single “Same Old War,” which seemed like an appropriate way to open their set on the “Tour of New Beginnings.” “I’ve been fighting the same old war…/They say it’s a battle that can’t be won…/Should I run away and change my name?/Or should I stay and fight through the night?…/I’ve come too far to go back now.” It sounds curiously like this song is about the band contemplating the tough decision to continue on with their career independently (if at all). But deeper meanings aside, the song set the tone for the rest of their set- loud, energetic, and involved with the crowd. Trevor Wentworth, the band’s lead vocalist, couldn’t stand still the entire set, and he ended up in the crowd very quickly. Fans were singing along from the start of their set to their songs, which sound like they could be on the radio while still being aggressive and in your face. The band also made sure to include their cover of Katy Perry’s “Dark Horse” in their set, which was surprisingly a crowd pleaser. Also surprising was that Our Last Night didn’t play any of their songs from before 2012 (they’ve been a band since 2004), which means they’re likely more focused on moving forward. But regardless, I saw the band perform in 2009, and they’ve certainly come a long way in the past five years. 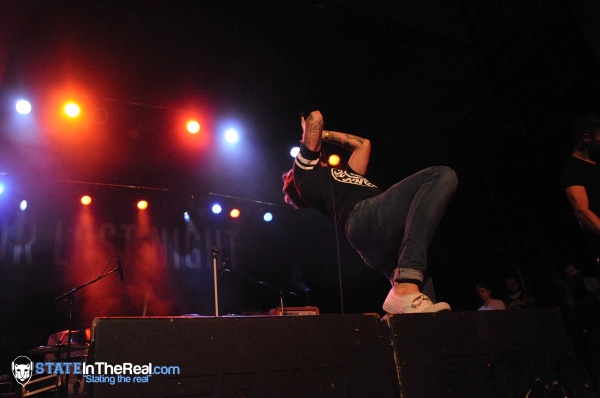 Next on the bill was Emarosa. Started in 2006, the band originally played metalcore, before picking up Jonny Craig to take over on vocals in 2007. After that, they modified their music to embody a more post-hardcore sound with a lot of soul added into the mix. Fast forward to 2011, and the band is without a singer. The band opened up auditions for a new vocalist, and then there was silence. Barely anything was heard from the band for over two years. No new singer, music, tours, updates. Finally, nearly two and a half years later, it was announced that the band had found a new vocalist in Bradley Walden, formerly of the band Squid The Whale. But it wasn’t until a month or two ago, nearly three years since their last show, the Emarosa started performing live for fans again.

When Emarosa took the stage, fans screamed in excitement. For some, it was likely the first time they had seen their favorite band in years. For many, it was a chance to see what the new Emarosa had in store for them. From the crowd’s response, it seemed that they accepted Walden’s new place in the band, and for good reason- Walden’s voice was powerful, and full of soul. Yet while his voice was his own, there were certainly some similarities. Bradley seemed to hold the same stage presence as the band’s former singer in the way he moved, composed himself on stage, and even talked. It felt very similar to a JC performance, just with a different voice. Yet while I may have been looking for something different, this certainly does not speak to the band’s performance. They were incredibly tight for playing live shows for the first time in three years. They even had a lot of energy at first, but this died out a little after the first few songs. They’re off to a great start- the band is probably still getting comfortable again with performing, and Bradley is likely still finding his exact place in the band and trying to fill some big shoes at the same time. Within a few months, I’m sure we’ll be seeing big things from Emarosa. (Update: Emarosa just released a new song titled “Mad,” and it’s killer. Be sure to check it out.) 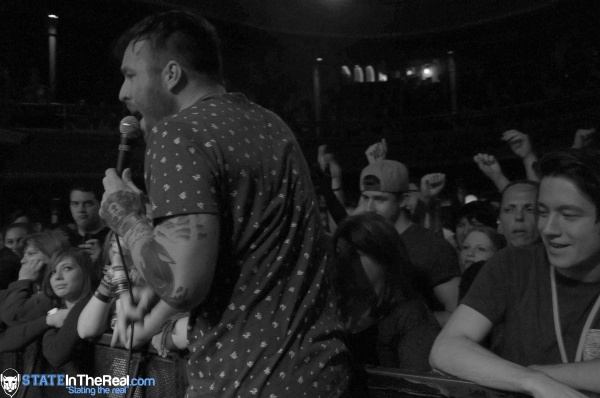 Finally, the headliner: Chiodos. Formed in 2001, the band spent the next eight years building up a fan base and gaining considerable success within the scene. Fans loved their music, and many felt a personal connection the band, and specifically their frontman Craig Owens. Then in 2009, fans were shocked when Owens was removed from the band. Owens formed a new band and released a new record. Chiodos found a new singer and made a new record in 2010. But things slowed down after about a year. Not much was heard from Chiodos, and the number of shows they played started to dwindled. In 2012, the band announced that Owens and Derrick Frost (the band’s former drummer, who also left in 2009) had rejoined the band. The band also added Thomas Erak of The Fall of Troy to play guitar for them. But even after the return and addition of major members, it wasn’t until Warped Tour 2013 when many fans got to see them. Finally, on April 1st, 2014, the band released their long awaited follow up album with Owens, Devil. And now, after years, the band was heading out on their first headlining tour, with former members back in the band, a new guitarist in the mix, a new album under their belt, and fans eager to see if Chiodos really was back.

The crowd had been waiting eagerly the entire night for Chiodos to take the stage. The lights dropped, and you could barely hear the intro audio track over the fan’s screams. The band energetically opened with their new single “Ole Fishlips Is Dead Now,” and fans responded to the musicians in the same way- by rocking out. The band’s intensity continued with fan favorites “The Undertaker’s Thirst for Revenge is Unquenchable” and “There’s No Penguins in Alaska,” complete with Owens jumping into the audience and crowd walking. Chiodos continued to switch back and forth between new songs and old, soon playing another new song called “We’re Talking About Practice.” The album had barely been out for two and a half weeks, and fans were singing along to some of the newer songs louder than some of the band’s older, more popular songs.

The set took a short break with softer songs “3 AM” and “Under Your Halo,” but picked back up again with “The Words ‘Best Friend’ Become Redefined.” More heavy songs followed, and Owens asked the crowd to get involved by chanting lyrics and participating in a wall of death. The songs were angry, but Owens had a positive message to go along with many of them. He told fans that no matter how difficult, it’s important to be yourself. He said that we can always improve ourselves to be better people. He also told the audience to think of the people in their lives who have put them down, and to yell at the top of their lungs to release their anger, because it’s not healthy to hold on to. After a few more, the band finished their set with a two song encore. At the very end, Owens walked to the front of the stage and yelled, “Tell your friends Chiodos is back!” He dropped the mic, the band took a bow, and everyone walked off stage. And with that, Chiodos was back. In fact, it felt almost as if they had never left.

’68, Our Last Night, Emarosa, Chiodos- all these bands have had some form of “new beginning”: Starting over with a new band, leaving your earlier career behind, finding a new singer, bringing back an old singer, and releasing new music. But even after all of the hardships, and potentially career ending events, each band seems to be back and stronger than ever. So tell your friends, because all of them are back. 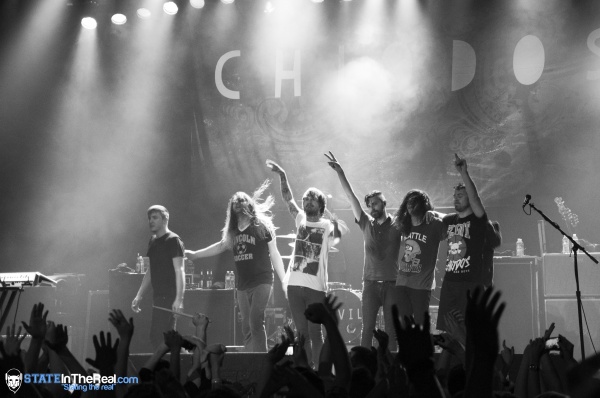