The arrival of Grammy award winning DJ, Steve Aoki at the BJC was nothing short of chest pounding.   The excitement was evident starting long before the concert with many fans lining up at the doors hours before.  Only standing room tickets were available resulting in a densely packed crowd covering over half of the floor space.  As you approached the stage you could feel the beats reverberating through your body–as expected of a powerful EDM concert. 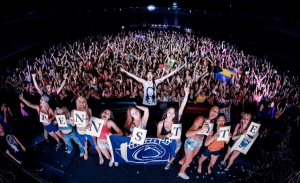 The crowd about exploded as the opening DJs left the stage, the lights dimmed, and two giant video boards illuminated to introduce the feature act–a small Asian man with a defining moustache and long hairstyle.  After two hours of opening DJs, Aoki presented himself to a swarm of sweaty students chanting “Aoki”, eager to dance to his beats.  His opening number was a high energy, fast paced, song.  The flashing and strobing lights sent the fans into a frenzy and many girls in the crowd got thrown up into the air and onto shoulders to reach sight of the stage.  There was a DJ table where the artists mixed their beats and Aoki didn’t hold back from jumping up onto the table to rage with the audience.  He was very engaged with the crowd; not long into his set Aoki announced that he was Facetiming a friend: “say hi to my friend everyone” receiving a roar of a response from everyone.  His crowd interaction continued by tossing out some worn t-shirts, and sending two rafts out into the sea of dancers.  His signature of tossing a cake into the crowd was a lot of fun, many of the audience made posters to encourage Aoki to “cake them”.  The eventual receiver of a cake to the face was a girl with a huge sign saying “Cake me bitch” including a picture of Breaking Bad character Jesse Pinkman.  During “intermission” Aoki attempted to get a “crazy” photo with everyone, which ended up on his Instagram account, of course.

The music selection was strong, including songs off of his new album Neon Future I and other fan favorites. The killer playlist was preceded by Zombie Nation played by an opening DJ, what a surprise.  That brought the energy up on the floor because as we all know Penn State students can’t resist showing their school pride.  Aoki’s EDM set was booming with bass and the variety of remixes and original songs made for an entertaining time.  The two songs that got the loudest roar from the crowd were the Aoki originals Turbulence and Delirious.  Throughout the music, Aoki would direct the crowd on when to really dance to the beat, mostly through his own enthusiasm and expletives.

It seemed Steve Aoki could have kept the crowd going until the next morning, but his concert did have to come to an end.  He received insane shouts from everyone.  The satisfied audience exited the arena, ears ringing, and still sticky with sweat.  Despite a bit of sensory overload, it was an incredible show.