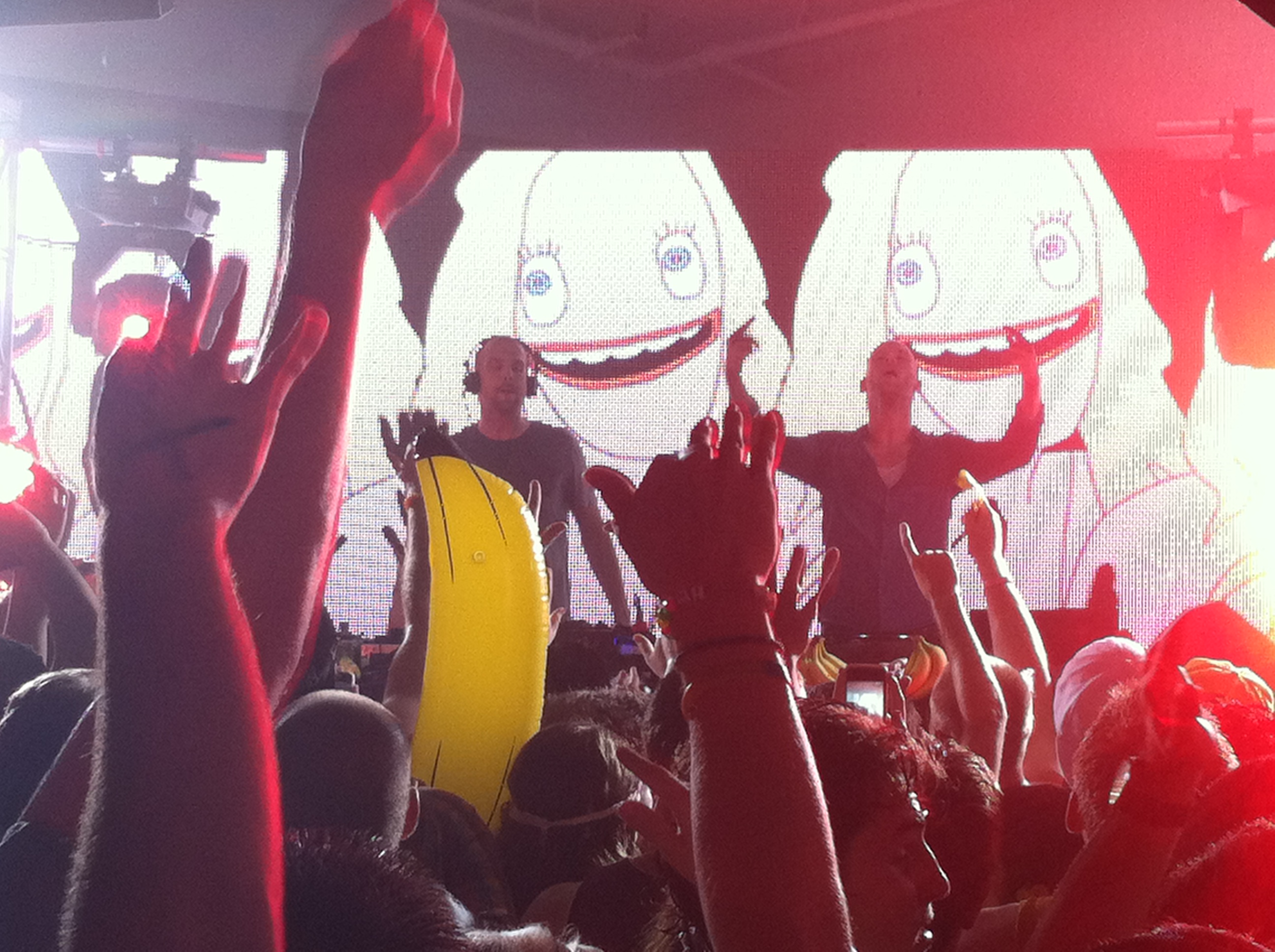 Ever heard of Dada Life? Probably not. They’re a small, quiet little pair of DJs that play a few good songs and pair it up with some pretty cool lights….

Yeah, right! The Swedish duo with a  reputation to rock the house came to State College on Wednesday night and did not disappoint. With bananas and champagne galore, LEVELS Nightclub was the place to be for hard beats, crazy lights, and a night full of raging.

Outside, waiting to get in, fans were lined up dressed in glow sticks, eclectic outfits (including banana suits), and full of energy. As soon as the doors opened, people flooded in to the sound of Nammo, a DJ who has opened for Avicii, Steve Aoki, Bingo Players, and other big names. The floor was packed after half an hour and, from my place on top of the speakers, the place was bumpin’. Nammo played his set, going hard and setting up the crowd for a long night of raging.

Next to perform was DJ Caveat, a DJ from San Diego California, who showed us what some 17 year olds are made of. He had the crowd jumping up, down, and all over the place, literally rocking the club.

Taking over for Caveat was DJ 12th Planet, who was there to throw down and celebrate his friend Carly’s 21st birthday (as shown by the t-shirt he was wearing). His mixes had the crowd going wild, especially with songs such as a Skrillex/Fresh Prince of Bel Air mix. He played for about an hour and had the crowd going crazy the entire time.

After much anticipation, Dada Life was up next. The two came out, their DJ booth lined with bunches of bananas because that’s what we were all about to do: go BANANAS. The crowd came prepared with their own, ready to show their support and enthusiasm. Dada Life played their set, periodically throwing out giant inflatable bananas and champagne bottles. As the beats got harder, so did the raging and soon enough the place was getting rowdy, but only in the good sense of the word. Everyone was feeling the love and dancing their hearts out. Every now and then, Dada Life would blast the crowd with smoke from machines, affecting everyone full blast, being in a smaller venue. At one point, they passed out bags full of what seemed to be cotton and the crowd tore them apart, spreading the contents all over each other, spreading the excitement and energy. After a long night of raging, the crowd was doused in champagne as the celebration came to an end. They finished the set, and then joined the crowd to meet, take pictures with, and spend some time with their awesome fans.

The show was insane from the first moment to the last and the energy never faded or diminished in the slightest. From 9pm to 2am LEVELS Nightclub was constantly going hard and the show was nothing less than phenomenal. But don’t worry if you missed it. Dada Life is playing AGAIN tomorrow, Sunday night (9/30) at LEVELS Nightclub and promises to be just as awesome as the show on Wednesday. So go out, experience the madness for yourself and be prepared, there will be bananas and there will be champagne. Bring your rage gear, because Dada Life knows nothing else but how to go hard. All. Night. Long.