Dave Matthews Band will tour and possibly release an album in 2012!

Matt Andersen
Mainstream Music
Comments Off on Dave Matthews Band will tour and possibly release an album in 2012! 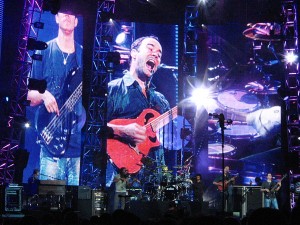 To anyone who has ever been to a DMB concert, you know what makes them so amazing.  Whether your favorite part is the show itself, the tailgating (my personal favorite), the illegal substances being passed around by everyone in the crowd (literally everyone), or the camaraderie  between the young and old fans that love to hear Mr. Matthews sing, you hope that every summer they will be coming back to rock your face off once again.  Last summer DMB did a set of festivals around the country, with the closest one to PA being in Atlantic City.  Well you can read it HERE, DMB bassist Stefan Lessard has confirmed a summer tour for 2012, and possibly a new album coming out before the tour!  Being that I didn’t make it to the festivals last year, I will definitely be attending at least one of the tour stops, but probably more!  See you there!