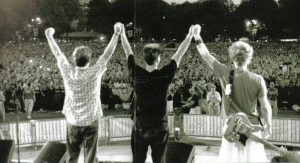 Dispatch, the band who drew more than 110,000 people to their most recent hometown appearance at Boston’s Hatch Shell and was the first independent band ever to sell out New York City’s Madison Square Garden, a feat they repeated for three consecutive nights, today announced that they will be performing at Penn State’s Bryce Jordan Center on Sunday, August 28 at 7:00 p.m.

Known as a band who attained superstar live status completely on their own terms, the members of Dispatch – Brad Corrigan, Pete Heimbold and Chad Urmston, released album after album on their own Bomber Records label, steering clear of the major label system and selling more than 600,000 albums.  In the process the trio became tru indie pioneers, building an enormous, passionate base of fans through the embrace of internet file sharing and word-of-mouth.  The band’s 2011 concert tour is their first in a decade.

Tickets are $40.75 for the public (limited quantity of tickets available for University Park students for $30.75 sponsored by UPAC) and will go on sale Friday, June 24 at 12:00 p.m. at the Bryce Jordan Center, Eisenhower Auditorium, Penn State Theatre, by phone at 814-865-5555 and online at www.bjc.psu.edu or ticketmaster.com.