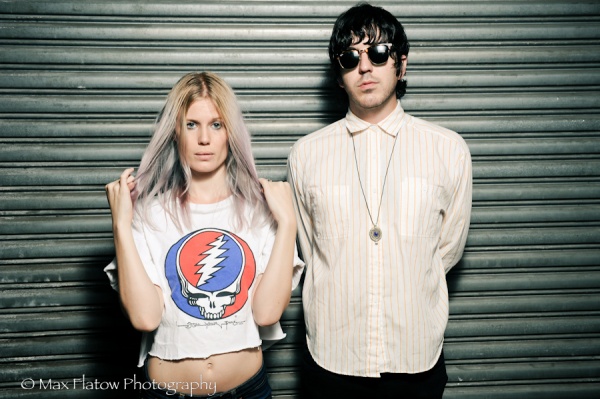 A little bit about Ex Cops:

Other Music Recording Co.’s first release of 2013 comes from the label’s very first signing, Ex Cops, whose debut single launched the imprint last April. Formed by Brian Harding (formerly of Hymns) and Amalie Bruun (formerly of Minks), the Brooklyn band was born in 2011, issuing a short-run, homespun CD-EP of hazy, lo-fi recordings featuring Harding’s opaque bedroom-pop songwriting juxtaposed with the duo’s sun-kissed harmonies. Two of the tracks, “You Are a Lion, I Am a Lamb” b/w “The Millionaire,” were soon released to the world on vinyl as OM-001, and the pair continued to write new songs while simultaneously playing more live shows, now working as a proper five-piece rock band, with the addition of good friends Kai Kennedy on lead guitar, Leif Young Huckman on bass, and Sam Bair on the drums. Keeping a handful of Ex Cops’ early sessions in place, the newly expanded lineup took to the studio to record this full-length with John Siket (Blonde Redhead, Yo La Tengo, Sonic Youth, etc.) sitting in the production chair, the resulting “True Hallucinations” is a mind-altering pop pill that maintains the intimate mood of the original group’s sound, but now presented in widescreen Technicolor.

Hardingʼs songs are effortlessly catchy, built from a timeless blend of gentle, somnambulant harmonies, chiming guitars, and loose swinging rhythms. You can detect influences ranging from vintage British and New Zealand indie pop (imagine the Chills covering Nick Lowe during “James”), to Factory Records atmospherics (“You Are a Lion, I Am a Lamb”), and closer to home, a little Velvets/Feelies jangle (“Broken Chinese Chairz”), along with a good dose of classic power-pop and the guitar-heavy sound of Teenage Fanclub (“Ken,” “Separator”). Yet in spite of this list of influences and precursors, Ex Copsʼ music is very much their own, sounding at once both classic and modern, their sugary pop songs enshrouded in a unique psychedelic haze. Coming in at just over 30 minutes, the album never overstays its welcome, but living up to its name, “True Hallucinations” will linger in your head, making for a pop trip that you’ll return to again and again.