Footage of NEW MUSIC from Young The Giant, Performed at Bethlehem MusikFest

Topher
Mainstream Music
Comments Off on Footage of NEW MUSIC from Young The Giant, Performed at Bethlehem MusikFest 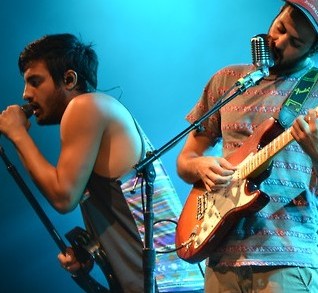 This past weekend, I was lucky enough to see another stellar performance by one of my favorite up and coming bands, Young The Giant. I’ve seen them 3 times now, and they continue to blow me away. The first time I saw them, I’d randomly decided to check out a free show in Philly that they happened to be playing at. I’d heard their fist-pumping anthem, “My Body,” many times on the radio and liked it. But it didn’t draw me in enough to check out their other tunes. As soon as I saw them live at this first show.

The second time I saw them was at Movin On, and I was slumming it over by the merch tables so I didn’t really get the full effect. I wasn’t going to make the same mistake twice, so as soon as they took the stage this past Friday, we bum-rushed the standing section. Something about their music is so relaxing and groovy while remaining so full of energy.. that combined with the crazy light show really made this concert a staple of my summer.

I was fortunate to be close enough that I could take some decent video footage. When they announced that they were playing new songs, I whipped out my mediocre video-camera so fast it almost went flying out on to the stage.

This new song, ‘What You Get’, has a great dance vibe, and kind of reminds me of a mix between Circa Surive and the Strokes.

This new song he didn’t mention the name of. But for obvious reasons, I have lovingly deemed it “Lots of lights, Buncha’Smoke.” You’ll see why. Regardless of the name, or lack thereof, the song is really beautiful. I can’t believe he had the energy to sustain that kind of vocal work after the energy it took for the earlier songs in the set.

And of course, what Young The Giant performance would be complete without a little R. Kelly?

If you haven’t seen them yet, make it a priority. They definitely set the Bethlehem Musikfest off on the right foot, I didn’t get to see MGMT on Sunday, but I’m sure they had a hard time topping this concert.