FREE EARL: The Return of a Prodigy

Topher
Mainstream Music
Comments Off on FREE EARL: The Return of a Prodigy 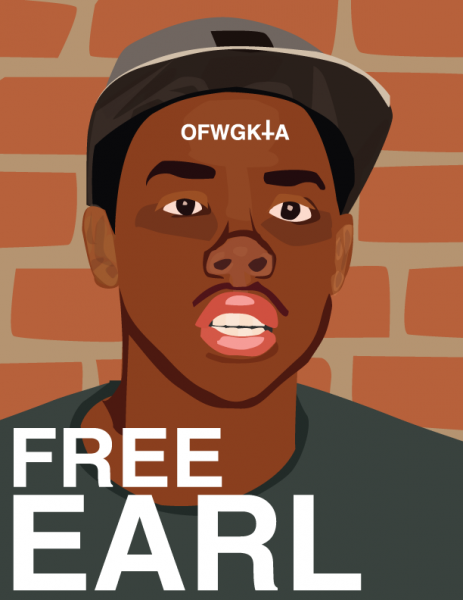 Free Earl. That’s been the motto for every Odd Future Wolf Gang Kill Them All (OFWGKTA) fan that knows anything about the group and their infamous and youngest member. Rumored to be “on vacation” by the group for the longest time, it wasn’t until Complex magazine literally Facebook-stalked their way to the truth that fans found out young Thebe (Teh-bay) was actually sent to The Coral Reef Academy, a reform school for troubled youths. It was Thebe’s own mother who had him sent there because she did not like the friends he had made in Odd Future and was worried he had he fallen in with a bad crowd.
For 19 months Earl was gone from his fans, who missed his incredible lyricism (which is said to be derived from his father, the famous South African poet Keorapetse Kgositsile). But now he’s BACK. That’s right Earl Sweatshirt is back as of last night when he posted a video on YouTube demanding 50,000 followers on his new twitter account @earlxsweat. After 50,000 followers he promised to release the rest of the snippet of a new song that was playing in the background of his video. Anyone who knows Odd Future was wary of the large possibility of this video being a ‘troll’ video, simply trying to trick them. But at approximately 11:12 pm @earlxsweat got his 50,000 followers, and avid fans like me waited impatiently for word from the young rapper that came in the form of these tweets: “50K. It’s coming now. Thanks” and “No troll just give me a second dude”. And sure enough he posted a link to his new website terttlefer.com which had the whole song “Home” posted to it. His new song used a James Pants beat called “Theme From Paris”.
This is really big for OF fans out there, but there’s a lot of unrest right now. From the sounds of it, Earl will not be working with Odd Future anymore and may be out of the group entirely. We’re not sure how far removed he is exactly because Odd Future isn’t just a music group; it’s a group of 60 friends who hang out with each other. Which brings us back to the real tragedy in this situation: while all us fans only lost Earl Sweatshirt, Tyler and all his friends lost their little brother Thebe.
Thebe’s departure was very abrupt; one night when Tyler and him were hanging out at Thebe’s house, Thebe’s mom kicked Tyler out of the of the house out of no where and told him he wasn’t allowed to be around her son anymore. That was the last time Tyler saw his best friend for a very long time. We don’t know if Tyler and Earl have seen each other since his return, and if Earl really is out of Odd Future then it’s very possible they have yet to meet up. There is very little information about the situation available to anyone due to both parties’ obsession with discretion. They all like their privacy in personal matters, and who can blame them? Earl is an 18-year-old kid. He’s been away from home and family and friends for a long time, and the last thing him or anyone involved wants is a bunch of people asking questions. Who knows when we’ll get word on what’s been going on? I suppose Earl Sweatshirt does. Hopefully soon. But at least the Early Man is back, and judging from his new song, he hasn’t lost a bit of his wealth of talent. Swag.