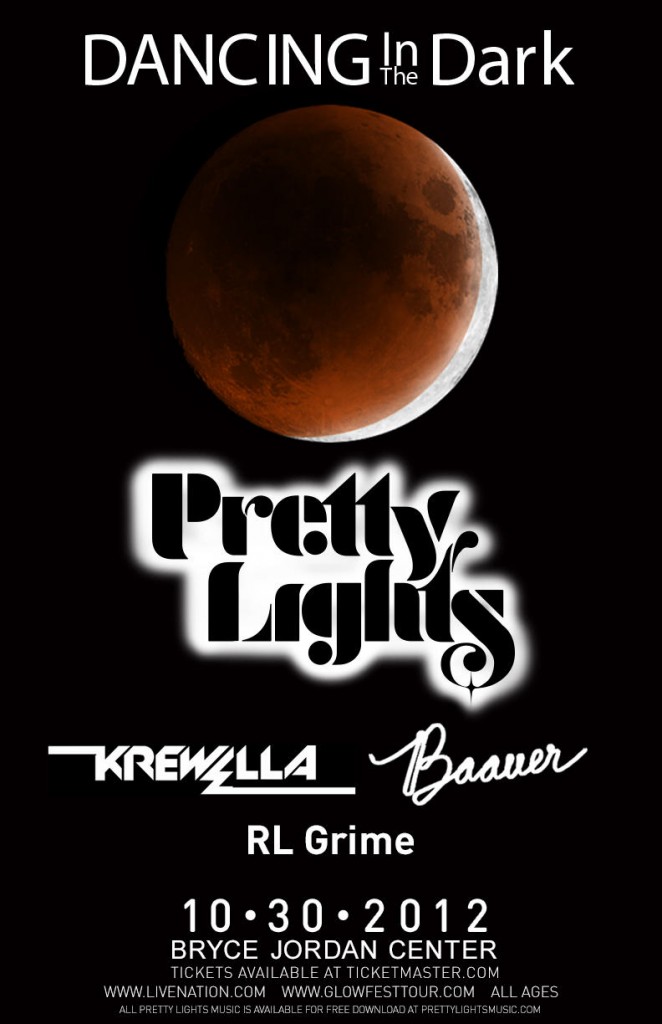 UPDATE: Krewella, Baauer, and RL Grime will be opening for Pretty Lights!

PRETTY LIGHTS, Dancing in the Dark at the Bryce Jordan Center October 30th!

TICKETS ON SALE WEDNESDAY SEPTEMBER 12 AT 10AM

18 AND OVER ONLY, VALID ID/PROOF OF AGE REQUIRED FOR ENTRY

HERE is a Spotify playlist to get you stoked for Pretty Lights!

HERE is a Spotify playlist to get you stoked for Krewella!

STATE COLLEGE, PA – GLOWfest (www.glowfesttour.com) is proud to bring one of the most exciting nights of college entertainment to Penn State:

Pretty Lights is an electronic dance musician that continues to reshape the electronica landscape, and the music industry as a whole.  After dropping out of the University of Colorado-Boulder in his freshmen year to pursue a white-hot music career, he has become an icon of college music and returned to grace the stages of many college auditoriums.

Pretty Lights, also known as Derek Smith, effortlessly combines elements of rock, hip-hop and dubstep into electronic mixes that are in a league of their own.  When it comes to incorporating audio samples into his songs, nothing is off-limits for Pretty Lights.  His production prowess has led to jaw-dropping remixes of songs such as Pink Floyd’s “Time” and John Denver’s “Take Me Home, Country Roads.”  Quickly catching the ears of fans and reviewers alike, Pretty Lights found himself headlining festivals such as Electric Forest, Snowball and All Good.

“We’re thrilled to bring one of the most talked about names in modern music to Penn State,” said GLOWfest co-founder Deuce Thevenow, “GLOWfest is a tour model that’s based on student input and involvement, so coordinating this festival with Penn State students has been a rewarding experience on both sides.  We’d encourage students interested in getting involved in live music to connect with us.”

In addition to remixing the music scene through over-the-top multimedia concerts, Pretty Lights has also influenced the music industry through similarly named record label: Pretty Lights Music.  While many record labels struggle to survive the troubles presented by illegal downloads, Pretty Lights Music embraced it, and came up with a simple solution to distribute great music to die-hard fans: offer up their music for free online, and let people donate if they are willing and able.  Through signing some of the most innovative electronic artists, such as Gramatik and Paper Diamond, Pretty Lights Music has influenced the international music scene by keeping a finger on the pulse of the world’s best electronica acts.

“So it felt like nothing short of magic when I saw my very first Pretty Lights show at Red Rocks back in 2008,” said P.J. Nutting of the Boulder Weekly.  “That first BOOOOM-BMMMM hit from ‘Hot Like Sauce’ and the bass seemed to shake moisture straight out of the sky.  When it was time for Pretty Lights, it was obvious these were going to be less ‘pretty’ lights and more ‘holy shit’ lights,” said P.J. Nutting of the Boulder Weekly.”

A GLOWfest concert is like riding a roller coaster in the dark: you can never tell what’s going to happen next, but a racing heartbeat is guaranteed for the duration of the ride.  Join us on Sep. 28 for one of the definitive moments of college life.