“Hoodie! Hoodie! Hoodie!” The clock flips past 10:14 and Alumni Hall has reached its capacity. The crowd, some of which have been waiting since 5 pm, can be heard from the opposite end of the HUB calling for Long Island’s favorite rapper, Hoodie Allen. A stage blanketed in a smooth sheet of fog and illuminated by blue light makes it feel all the more exciting and ethereal when Hoodie strides out and steps up to the plate- the crowd goes wild.

Opening up with a direct challenge right off the bat, he jumped straight into “Show Me What You’re Made Of.” The sea of students didn’t hesitate to oblige him and erupted in a chorus of cheers and movement. Impressed with the crowd’s energy, he transitioned straight into “Fame Is For Assholes.” 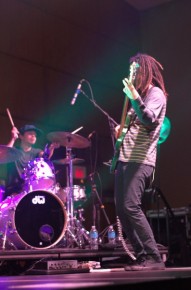 As the songs kept coming, it was clear that everyone had lost themselves in the moment and were being carried away on his lyrical flow. Cameras were in the air and people were jumping up and down, dancing with complete strangers.

Following a similarly exciting Penn State freestyle verse at the end of “You’re Welcome,” it was time for a crowd favorite and performance staple – “Cake Boy”.

As the intro music began to play, the crowd knew what was coming as Hoodie and a few other members stepped up to the front of the stage with cakes in their hands, made by SPA’s own Autumn Strausbaugh. It was time for Hoodie’s absolute jam “Cake Boy” and it was time for the crowd to experience the cake first hand. By launching the four cakes into the crowd Hoodie had started an all out food fight, sending the sea of students into an excited frenzy.

As the concert continued, the crowd didn’t flag once, a testament to Hoodie’s incredible stage presence and ability to get the crowd involved. Going out with a splash to his incredible single “No Interruption,” the crowd was drenched in water and illuminated by flashing lights as crowd surfers took to the sky and allowed Hoodie to go out on an incredible note.

I went into this show being mildly familiar with Hoodie Allen, knowing his hits “No interruption” and “Cake Boy” – but it is safe to say that Hoodie hit a solid home run with his show at Penn State as I, and many others, left that concert with a love for Hoodie’s personality and a resolve to see him again if we ever get the chance.

Don’t forget to check out his upcoming release “People Keep Talking” when it’s released on 10/14! 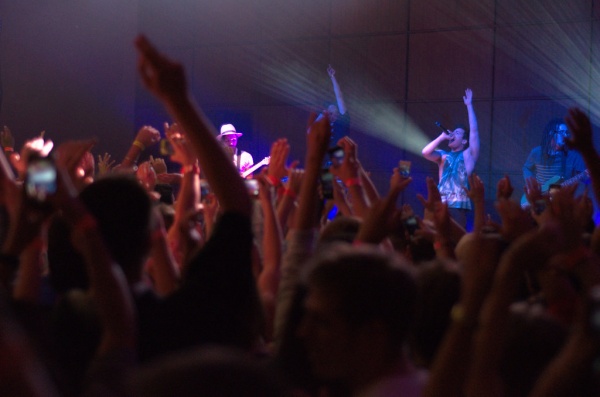