Chris Will
Mainstream Music, Music
Comments Off on Intergalactic Indie-pop: Walk The Moon 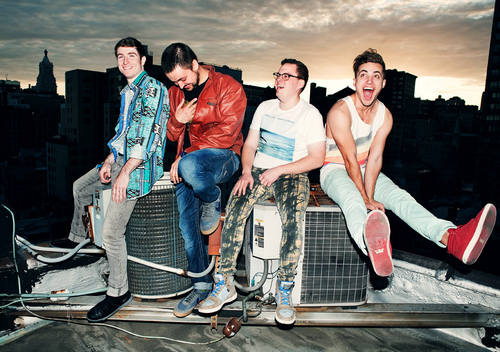 Walk The Moon emerges from the thick, urban sprawl of Cincinnati, wielding synthesizers, guitars, and an indie-pop personality that screams “up-and-coming.”  Their self-titled debut added some extra shine to the summer, with each of the 11-tracks concocted with scalding-hot hooks and brawny guitar-laced power pop. Even now, in the dead of winter, Walk The Moon exudes the kind of warmth to keep you nice and cozy with your headphones.

Glitzy synthesizers and heavy guitar-work stir through tracks such as “Quesadilla” and “Lisa Baby,” as frontman Nicholas Petricca welcomes his new fans and old friends with his strong, smooth vocal work. He paints pictures of hot romances and breath-taking love, his endearing and flowery songwriting adding further spice to the romping instrumentation. “Next In Line” pulsates with an unassuming dance appeal, but allows Petricca’s passionate singing to really take center stage.

The fourth track and breakout hit, “Anna Sun” is an epic, swooning indie-pop orchestration, brimming with positivity and pure, unbridled fun. Petricca invites us join him on a night on the town, shedding away the struggles and living in the moment.

“Tightrope” and “Jenny” thrive more on alternative-rock, lightly dusted with electro but relying more on guitars. “Shiver Shiver” is just one giant hook, a sugar-frosted earworm of a track. It’s guaranteed to become embedded in the subconscious, whether you want it to or not.

“Iscariot” is the first (and only) real slow jam on the album, Petricca showing off his falsetto between the pillowing harmonies and soft, symphonic production. “Fixin” is a bit more of an exotic affair, the warbling synthesizers and filtered background vocals moving to a head-bopping percussive beat. Finally, the album closes with “I Can Lift A Car.” This melodramatic, low-tempo jam suddenly opens up into a singsong chant-chorus, once again exhibiting that signature catchiness; as silly as it is undeniable.

Have you heard the album? Do you like the band? Weigh in below in the comment section, and tell us if you think Walk The Moon is bound to be indie-pop’s next big thing!