Eric Poluhovich
Music, Outsource Interview
Comments Off on Interview with Chrissy from Dangerous Ponies and a new EP from the band 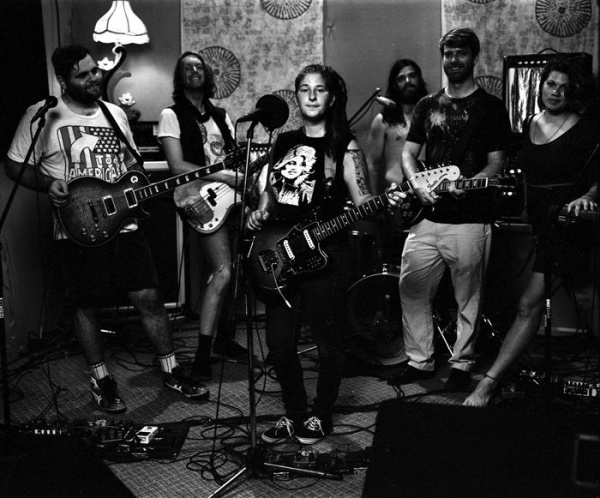 Every Friday at noon, the Student Programming Association has a band come and play in the HUB for their Noontime Concert Series. Two Fridays ago (the last Friday before break), the band Dangerous Ponies came to play. I wasn’t sure what to expect when I sat down to watch the seven-piece, but I’m glad I went. Before even playing their set, singer and guitarist Chrissy Tashjian complimented me on my comsic cat t-shirt. The band’s casual, friendly, and easy-going nature continued from here. The set was full of fun, happy sounding songs. The band’s two keyboardists/hype man and woman danced side-by-side with tambourines during keyboard breaks. The band’s male keyboardist, Brooks, even went into the crowd and picked a random audience member to tango down the aisles with. The band gave off a great energy, and all the members seemed to be really connected. After the show, Chrissy was nice enough to interview with me. Unfortunately, I lost the original interview. Lucky for me, she was nice enough to interview with me A SECOND TIME. Big thanks to Chrissy and the band for their kindness. Check out the interview below, and the one of the band’s new songs below!

Please introduce yourself.
Chrissy: We are Philadelphia band Dangerous Ponies

Tell me a little bit about your band/your music.
Chrissy: We play dance/surfy/psychy indie music that we spend a lot of time crafting. We have been playing together/touring for a little over four years now. We self released our first EP! Our first full length was put out by the now disbanded ‘Punk Rock Payroll’. We are about to put out our brand new Tender Heart 7”! The 7” is 1 B side, and 3 songs from the upcoming full length!

You guys seem like you like to have a lot of fun. Could you elaborate on that?
Chrissy: We do have a lot of fun, and we love each other for sure! Mikey the drummer is my little brother, and Sarah the keyboard player is my girlfriend. We have all known each other for a long time: Evan and Kyle are roommates, as well as Sarah and Brooks. Andy is our BRAND NEW BASS PLAYER! We went to college together. We try and create a pretty inclusive vibe when we play.

What’s an interesting story that you have from the road?
Chrissy: One time Mikey fixed the van with a drum stick! We were in the middle of nowhere in Georgia, and we pulled up to a gas station, shut the car off, and when we went to start it again it just wouldn’t start. The gear shifter was completely loose and moving up and down like it wasn’t catching anything. Mikey looked under the car, realized what was up and got it back in place with his drum stick.

You guys still press some of your albums and EPs on vinyl. Is that something that’s important to you?
Chrissy: I personally think vinyl sounds better. It’s also way easier to sell. I feel much better selling someone something with a little weight to it: it feels like we are actually giving someone something with some substance. There is also something to be said about the experience of listening to music on vinyl. It takes a lot more effort to skip around a record than it does a CD, and I know when I end up listening to vinyl, I end up hearing a body of work instead of just skipping around to what I’m familiar with.

What can we expect next from you guys?
Chrissy: We are about to head out on a short tour to and from SXSW! We will be touring back with our buddies Norwegian Arms, which we are super excited about. Then we have our Vinyl Release Party in Philly, and we are going out on a month long support tour that we are super stoked about!

Check out the band on their Facebook here, check out/download their new EP here, and listen to their new songs below!