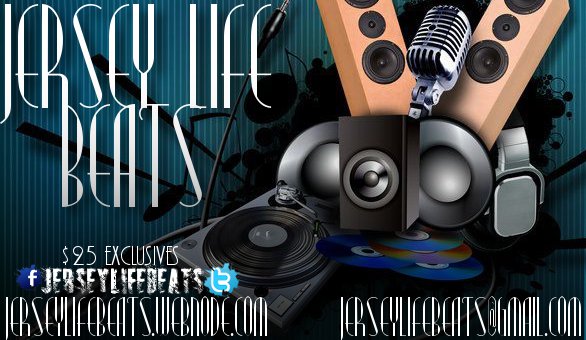 For the record, can you state your name and your role in Jersey Life Beats?

My name is Thomas Suckar, but everybody knows me as Jerz. I was born and raised in New Jersey. Ive been in State College for about 5 years now. Im a full time producer. I pretty much produce and mix everything that comes out under the name Jersey Life Beats.

Give me a breakdown of what Jersey Life Beats is all about?

Jersey Life Beats is basically a production company i have started. Right now its basically a one man show but i work with a bunch of people for different reasons. I keep contact with basically everybody who owns and runs a studio in this area as well as out of the area(CENTRAL,PA). My motto is “if you’re not ready to invest in yourself, what makes you think somebody else is ready to invest in you?”. I make it possible to do so because I provide high quality production at a low price. In this day and age, beat production has become dime a dozen. Alot of artists i know look to websites like SOUNDCLICK.COM for production. The only problem is usually most of the people on that website and just producers in general are charging outrageous prices for their beats. Prices that most “underground” or independent artists can’t afford. What i do is make the same quality beats and sell them for a much much lower price. A price that basically anybody can afford( $25-$50 for EXCLUSIVE RIGHTS). I’ve always supported and been a part of the underground music scene. The artists who deserve a chance to shine and put out Original music, but simply can’t afford to do so. So because of that they are forced to put out countless mixtapes using Industry beats that they don’t own. I stress to everybody who wants to begin a serious music career to OWN YOUR MUSIC. It will help you avoid a lot of problems in the future.When you work with JERSEY LIFE BEATS you have the opportunity to do so.

You mentioned that you run Studio Placement and Student Engineering.  Give a quick breakdown of what you do there and where some studios are located.

This is a new thing i have been doing. I noticed that a lot of artist in this area struggle to find studios. Searching online will bring close to nothing. I am here to show you that there are in fact plenty of studios in this area that you can go to record at, again all for a reasonable price. Most just aren’t listed. Like i said earlier with production, studio time is the same way. Most studios will charge you an outrageous amount of money to record a track. I currently work with and have access to studios from State College to Williamsport,PA. As well as my home studio located right here in Bellefonte,PA. The main studio i refer my clients to is the Main studio located in Renovo,PA. It is about an hour from State College but provides you with everything you need. It is owned and ran by a buddy of mine and a fellow producer by the name of Mister Costulas(George Costulas). A lot of money has been put into it. It has pretty much everything you need whether you want to record a band or record a rap song. Also if there are any producers who simply dont have the right equipment, everything you need is there. Simply if you are looking for studio time you can Email me at JERSEYLIFEBEATS@GMAIL.COM and i can refer you to the right studio for you. Like everything else i do, All studio time can be booked at a reasonable price. The price usually includes everything meaning  recording,mixing,mastering. You can request me as a studio engineer or you could simply work with the engineer who owns the studio.On top of Studio time and production I can now set you up with my Video Producer. Trying to shoot a music video? Email me and i can set you up!

What different types of equipment do you use for recording artists in the studio?

I myself have a few different things i use. If i am just recording at my personal home studio here in Bellefonte i like to just use my controller and a few different programs like Reason,FL Studio, or cubase mixed with a massive archive of sound kits, plugins, and all that good stuff. If i am recording up at the main studio in Renovo,PA there are more options. LIke the mpc, the motif and so on. Ive always been a big fan of Fruity Loops. Since back when all i had was a demo and the stock sounds as a young kid.  Some people look at FL Studio the wrong way. When in fact its really not the program you use but how you use it. Alot of the hits you hear over the radio believe it or not have been produced on FL. Different people have different preferences when it comes to what program you are using. Ive always pretty much stuck to FL Studio, and Reason.

What strategies do you take when recording artists who each have a different musical perspective? What do you and them bring to the table in the studio?

I like to let the artist do what they feel is right. At the end of the day i produce instrumentals or beats whatever you want to call it. I haveto  leave it to them to find their own angle. Its part of the fun to see how a person interperts my music. 9 out of 10 times there are no vocals on the music that i produce. So really its up to the artist to feel the beat and take it from there. I try to do my best to get the best sound out the artist when engineering a project. I still always go by the rule “a crappy take is a crappy take”. Meaning i cant make you sound like a millionaire if you sing or rap like somebody who just started yesterday.

You recently recorded Maserti Mo and he had recorded a song for Joe Pa. How does it feel to do something special like that especially for a great man like Joe Pa?

I haven’t yet recorded it. Im not sure if i will be recording it but yes i got in touch with Maserati about a month ago.  We talked about a few things chopped it up for a while. I asked him to check out a few beats and to let me know if he was interested in anything. After a few minutes he reminded me about the Joe Paterno tribute track i had recorded. I really couldn’t believe how perfect it was for him. Its like i made the beat just for him. Masi has a real history with this guy. He played for him. I couldn’t think of a better person to give that beat to… The day Joe Paterno passed away i was sitting in my studio at home. Watching old videos of his speeches and just a variety of great footage of Joe. From the early days to the Later days. Really taking in everything he has done over the years. It was just such a sad day for happy valley when Joe passed. I mean we’re talking about a man who built libraries and donated so much to the kids and to Penn State. Im not sure State College or college football will ever see somebody like that again. With that being said after watching countless videos of him from over the years Listening to speeches from the pep rallys, and award cerimonies. I wanted to put how i felt about Joe into an instrumental. I started the instrumental by chopping up one of Joe’s speeches from an award cerimony a few year ago. It starts by saying ” So thank the great memories, great teamates, guys you could trust, guys you loved, guys you would go to war with tomorrow. We’re so lucky, we’re so lucky, lets keep it going because if we lose what we have we’re gonna lose an awful lot in this group. We gotta remember that we can’t get conned out it, we cant get talked out of it, cause what we have gone through will hold us in good stead and give us a chance”. Behind that speech is a somber piano and thoughfull violin. I know its really gonna hit Home. For Masi and all of State College. The song should be released with in a month and will be featured on Masi’s next mixtape. Stay tuned. I guarentee this song is gonna be enough to bring a tear to an eye of the strongest man.

What are future projects you have planned up that State College should know about?

I have sent beats out for multiple projects that i am hoping to be selected for including Artists like Philly hip hop legend Jakk Frost , as well as Tyrese Gibons who is looking for up and coming producers for production on an album. Another other artist Philly Redface from Philadelphia,PA.. Redface is cool guy, everybody should check him out. Also I recently have been producing music for a group out of Oregon called Oregonized. They are a bunch of cool guys, i think alot of people will take to there music.  Im also working with a few artists around State College, people like Mic Dough, Danny Boy(aka Work), Maserati Mo, and im hoping to cook something up for LV(amen shekem records). I checked LV at the roundtable showcase at the days inn a few weeks back. I think you guys were actually there as well. Was good to see some local hip hop. All in all i think it was a good time. I even thought about putting something similar together in the future. Maybe just an all around showcase for all types of music. Maybe something for producers as well cause i know there are plenty of them out here that we really dont know about yet. I’ve just been working man, networking with artists all over the world. Im willing to work with anybody that is serious about their craft. Anybody interested can EMAIL me at JERSEYLIFEBEATS@GMAIL.COM or check the WEBSITES out at JERSEYLIFEBEATS.WEBNODE.COM or SOUNDCLICK.COM/JERSEYLIFEBEATS.

What advice do you inform people of who are trying to make a living in production?

Well, I mean its not an easy job. I’ll be honest the money isnt always great at first. The grind is important, networking is key. You just gotta find your sound, and some serious artists who are willing to work and invest in what they do. If an artist isnt willing to pay $25 bucks for original production, then i cant take him/her seriously. I do it cause i love the music, lol but at the end of the day somebody could take my beat and make a couple million dollars off of it. So i need my cut up front haha. To be real though i would be doing this anyway even if i didn’t make a dollar off of it. Though I still enjoy the feeling you get selling and beat and hearing the finished product. If you are looking to become and overnight Multi Million dollar producer. Its prob not gonna happen. Don’t quit your day job.