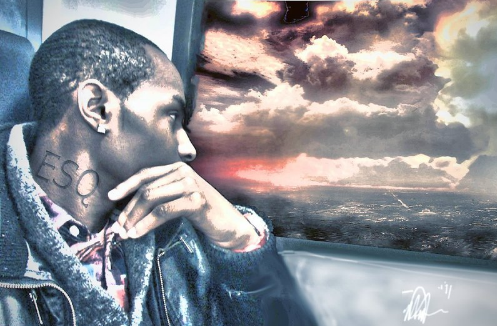 Check out our interview below with Penn State local and talented hip-hop artist E.S.Q.!

SITR: Can you tell us a little about yourself and what you are doing in Happy Valley?
My name is E.S.Q, it’s an acronym for Elaborate Sounds Of Quality. I am currently a Penn State graduate, with a degree in International Politics Relations. I am a Brooklyn native born in Manhattan Hospital, but raised majority of my life in Bedford Stuyvesant.

SITR: How did you get into music?
I started writing when I was around 15 or 16, in the basement of my house with some friends from my block and school. I didn’t really take it serious then, it was simply cyphers in pizza shops banging on the tables with friends until we were thrown out. But, I began to grow a love for the music. I started laying down tracks off of a mac computer in hazleton with fellow artist, and people supported so some of us continued. By the time I reached to Upark the love for music was uncontrollable. I used to hit sparks late night with some of my friends, and we would record all night. But, it was never the need for recognition for me, I just enjoyed releasing my emotions on my tracks for people to relate too. I performed a few times in Upark for fashion shows, parties , and even the unconventional sociology class of 700 people.

SITR: Who are your biggest influences for your music and your mixtape titled, “The Personal Statement”?
My influences are anyone who has dreams and are trying to meet those dreams. Anyone that has struggle that is also on a journey similar to me, and needs a playlist to listen to as they move up the ladder. I notice as I began music that I would copy my influences such as Jayz, Big L, Biggie, Nas. But, as I grow in music I am no longer looking for tangible influences, Instead I base my influences off of experiences. Every track that I write, every bar that I think off there is a meaning behind it. The particular tape was a follow up from my past tape named Dormitory Thoughts, its the maturity of that kid once in a dorm by himself filled with emotion. I still have the same emotion, but I have learned to contain it and let it fume through my music and my words. Every mix tape I have dropped and will drop will tell a story of my current situations, but the true story lies in the whole tapestry of tapes soon to come. This tape was produced by State College very own Oren Speigel, we worked collaboratively on this. We had about 2 months to do this being that we hooked up late in the spring semester. So this was a quick fix to test out the ears of what people like. So in the future, we can take time to truly cultivate a beautiful sound for the ears.

SITR: What goals do you have for your music in the future? What are you hoping listeners take away from your mixtape?
My goals are to offer a new sound, I never want to sound like anyone else. I want to push the frontier of what hip hop is supposed to sound like. I am in no rush to get signed, but I do want people to notice and appreciate the music that is being made because it takes a lot of work, and it fresh, unique and elaborate. So if you enjoy the tape then pass it on to a friend, family member. Reach out the me to tell me what you like or did not like so I can make the next project even better.

Check out his mixtape below: