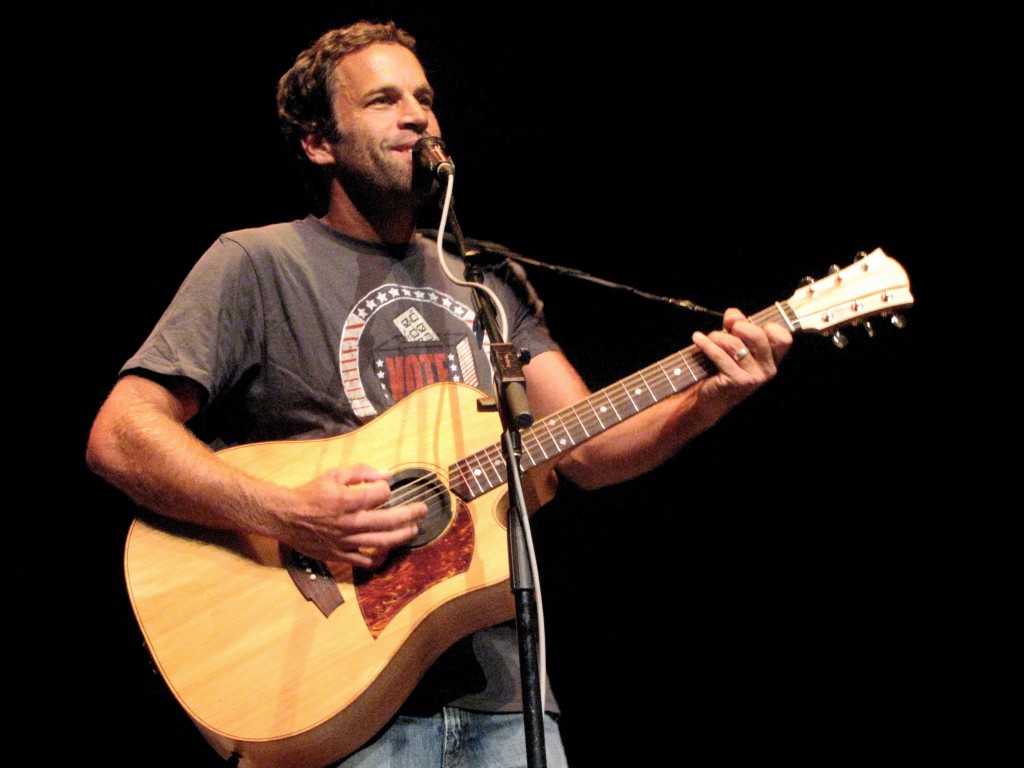 The time is 6:30, the place, Eisenhower Auditorium.  It is the Rock the Vote concert featuring ALO, G. Love, and Jack Johnson. The tickets were handed out earlier in the day, with a line wrapped around the auditorium almost twice compiled of students eagerly waiting to get their hands on one.

As I climb the stairs to the top balcony, I reflect on the fact that I really am about to see Jack Johnson, for free. I take my seat in the center of the front row, perfect view of the stage. I sit there anticipating the show, along with the rest of the crowd as “We Are” chants erupt periodically. Finally, the lights dim and out comes Animal Liberation Orchestra, or ALO. Having never heard them before, I am curious as to what is going to happen, and am pleasantly surprised. They play their first song, emitting a “jam band” groove throughout the auditorium. I notice 2 girls down below already on their feet and dancing, but it’s not until the second song  that everyone joins them. By now, I’m hooked. Their music is funky, relaxing, and easy to jam to. The sounds coming from the acoustic guitar sound just like an electric, which adds to the vibe, and the keyboardist does an amazing job of revving the crowd with his solos. I hear the kids next to me saying, “This is good. I like this!” and begin to feel the beachy vibe that’s setting the stage for Jack Johnson. ALO plays a great set, announces that they have an album coming out this month, and then, pulling out a ukulele, ends with their most popular song, “Girl, I Wanna Lay You Down” with a little rendition of “I wish that I knew what I know now” from “Ooh La La” by The Faces at the end.

Next to come out on the stage is G. Love, a bluegrass harmonica player and guitarist that has been playing and touring with The Avett Brothers. His music keeps people on their feet, and he can barely contain himself. His legs are bouncing all over the place, stomping on the stage, banging together, keeping the beat and energy alive. He caters to the crowd, changing the lyrics to reference State College and the freezing whether up here. He also tries to relate to the college student crowd through his song “Booty Call,” a catchy song, especially with the harmonica, lyrics, and chorus. As he draws to an end, he throws in a cover of “Just a Friend” by Biz Markie. His performance is solid, and his energy is out the door. He mentions he’ll be back with the rest of his band to perform at the State Theater on Nov. 7th. He plays two more songs, concludes his set, and the lights on stage go out.

Now, its show time. The stage crew runs around and arranges all the particular instruments, speakers, mics, and set ups for what seems like forever, and then the lights on stage come back on. Out walks Jack Johnson, his bassist, Merlo Podlewski, the drummer, Adam Topol, and the keyboardist from ALO, Zach Gill. The crowd goes nuts as Johnson says, “How’s everyone doing tonight?” And then the set starts:

The groove is consistently, in true Jack Johnson style, beachy, relaxing, soothing, and just a good time over all. At the end of “Bubble Toes” they do a little tribute to The Specials singing part of “Message to Rudy.” After “Breakdown” the guitarist from ALO comes back out and plays “Go On.” For “Banana Pancakes” Gill steps away from the piano and straps on an accordion. He then proceeds to play in the front row of the crowd, which amps everyone up. A few songs later, G. Love comes back out and joins everyone for “Upside Down,” during which the bass player unexpectedly busts out in a rap that makes the crowd go wild. Johnson ends with “Are They Laughing at or with Me?” leaves, and then comes back alone for his encore, beginning with “Do You Remember?” He plays two more songs, reminds the fans to go out and vote (because, of course, that is why we are all here in the first place), then is off for good, leaving the crowd in a relaxed, uplifted state ready to go catch a wave or, more realistically, do homework.