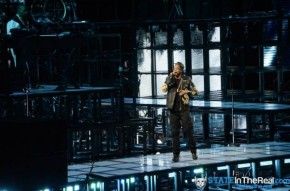 Jay Z concluded his Magna Carter World Tour with a stop at Penn State’s Bryce Jordan Center on Friday. The award winning rapper would not disappoint as he commanded a spirited two hour show. Jay treated fans to his full musical library. Hov visited everything from Reasonable Doubt to Watch the Throne. By the end of the concert any critics wondering if Lucky Lefty had lost a step would be silenced.

The show opened with a set by DJ Jus Ske around 8pm. By 9 the boss himself was ready to take the stage. Jay Z opened with “U Don’t Know” from The Blueprint to the deafening cheers of a packed house. Fans saw the rapper clad in all black revel in the yells as he took the BJC in. Hov introduced his band and his guest; super producer Timbaland. The show took off from there. Jay Z performed “#FuckWithMeYouKnowIGotIt” and “On to the Next One” from Magna Carta Holy Grail and The Blueprint 3 respectively. The rapper teased fans with a rousing version of “Drunk In Love”. Girls and guys alike searched for a Beyoncé appearance to no avail.

The concert continued as Jay ripped through hits from The Black Album, Magna Carta Holy Grail, and Vol. 3… Life and Times of S. Carter. Things slowed down and got nostalgic with Jay’s performance of “Dead Presidents” and “Can I Live”. The Brooklynite channeled the same fire that catapulted him to the top in the 90’s as he unleashed line after line. Jay seemed to give a nod to deceased rapper and friend Pimp C on “Big Pimpin’” as he rapped the Texas legend’s verse. 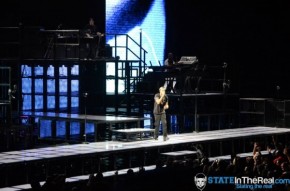 The head of the Roc commanded the BJC crowd during each of his three “acts”. By the third set Jay was ready to tear the roof off of the arena. The multi-millionaire explained how he had been fined during a show for telling fans to stand on chairs during “N*ggas in Paris”. So, of course he couldn’t resist repeating the same act with a crowd of rowdy college students. Arena staff was told to stand down as fans stood up and danced to the mega-hit. It felt like Jay Z was making a statement. Here was a performer, a business man, a tastemaker who shrugged off the threat of a mere $50,000 fine in order to have fun. Who can stop him, huh?

Mr. Carter reminded fans of his appreciation during the last act of his show. Cameras panned to fans with funny signs and homemade outfits the rapper cosigned. At one point a young man passed an envelope up to the stage that contained a $500 check to the Shawn Carter Foundation. Hov got the crowd to sing “Happy Birthday” to a lucky fan by the stage. Jay thanked fans for their support and explained that the feeling he was wrapped in never gets old. The rapper introduced his band and then went back to performing for couple offerings. Jay invited State College to his hometown on “Empire State of Mind” and brought us back to The Blueprint with “Izzo”. Diamonds flew up everywhere in the arena when Jay Z performed “Hard Knock Life”. There was a certain solidarity that filled the BJC as fans swayed to the rapper’s hit about hardships and success.

Jay’s last song, “Forever Young”, was particularly poignant. Hov dedicated the song to late world leader Nelson Mandela. Jay stressed that anything is possible as he glided through the song assisted by the lights of smartphones and lighters. He guided the crowd and brought the sea of lights into one body; one experience. Jay Z’s prowess as a rapper and sheer influence was on full display on Friday night. Fans were reminded what the Roc symbolizes and just how great the architect who made it is. Concerts that provide a good time are everything. Concerts that transcend your mental presence are rare. With that said; it’s no wonder we proclaim that Jay Z is the greatest of all time.