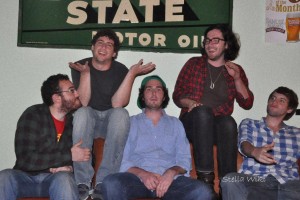 September 7, 2011 – State-College-bred, Philadelphia-fostered Americana rockers Kalob Griffin Band are returning to their hometown at no other place than the beloved Café 210 West, on Saturday, September 17. In anticipation of traveling Penn State fans arriving in Philadelphia the night before the big PSU-Temple football game, the band will precede their performance at Café 210 West with one at the Grape Room in Manayunk the night before.

The KGB has captured music aficionados everywhere after headlining at multiple Philadelphia venues, electrifying crowds in the Carolinas, and most recently, being voted by the fans as a finalist in Philadelphia’s Beta Hi-Fi Festival. After working diligently through a summer decorated by endless shows, including a performance to thousands before Steely Dan at Bethlehem’s Musikfest, the KGB has audiences along the east coast curiously buzzing about the band’s next move.

What can possibly follow two years of relentless touring? The answer to the fans’ prayers – a highly-anticipated debut full-length album. On the upcoming record, Griffin remains uninhibited with his raw, narrative lyrics, and the band responds with their free-spirited, soul-twisting melodies, which are reminiscent to that of simpler times. The 12-track album, which the band will record at Milkboy Studios at the end of September, will contain telling stories woven together by catchy guitar riffs and exquisite instrument that is certain to attract new audiences and grasp tightly onto its devotees.

“The combination of our past experiences and musical growth will certainly make for a compelling first album,” says Griffin. “It will feel good to finally see what the KGB is made of.”