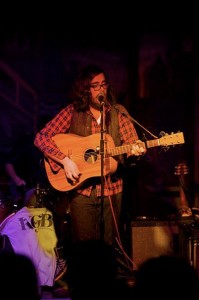 March 28 2011 – Folk rock quintet The Kalob Griffin Band is enthused to announce the release of its highly anticipated self-titled EP, released this week and now available on iTunes (http://itunes.apple.com/us/artist/kalob-griffin-band/id427401259). This is the first EP for the Americana rockers, who are currently touring the east coast and plan to return to their home of State College, Pa. for a performance at Café 210 West on Saturday, April 2. The Kalob Griffin Band, or KGB as it is known to its loyal fans, is famous for pioneering to expand the local music scene in State College and became a staple to original performances in the area. After leaving State College in May, the band has since been on tour opening for Bobby Long and Michael Franti & Spearhead.

The Kalob Griffin Band began perfecting its debut EP when it completed its lineup in December 2010 to include Kalob Griffin on lead vocals/rhythm guitar, Rob Dwyer on lead guitar/mandolin/banjo, John Hildenbrand on keys, Derek Biddle on bass/backup vocals, and Eric Lawry on drums/backup vocals. The band has since spent countless hours with local legend Marc Frigo, who produced the EP. The six-track disc, which includes fan favorites “Whiskey My Love” and “Honeymooners,” is only a preview to the band’s full-length album, which is expected to hit digital release this summer.

Having played to crowds of thousands and becoming a familiar face to attendees of both WXPN Music Festival in Philadelphia, Pa. and Mile High Festival in Denver, Co., the Kalob Griffin Band provides its audience with a raw power and energy that goes unmatched. The band’s performance on BalconyTV (http://www.youtube.com/watch?v=Q2oYIovqQrA) has had over 1300 views to date.

“We chose six of our songs that best represented our musical diversity and honest lyrics,” says lead singer Griffin. “After playing these tracks live for the past year, the songs have sunk into their own individual elements, while seemingly having a cohesive feel. We are really happy with how the recordings turned out and look forward to releasing our first full-length album.”

For more information and upcoming shows for The Kalob Griffin Band, check out: