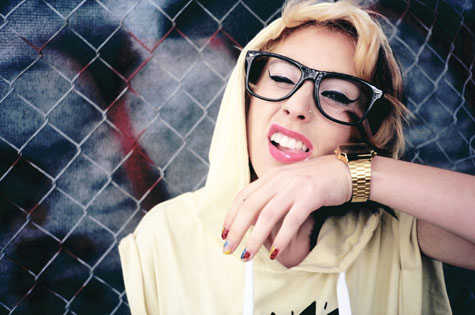 Kreayshawn’s catalogue of singles is as brief as it is ridiculous.  There’s her smash hit “Gucci Gucci,” which is more of a pop culture statement than it is an actual song.  Then there’s her collab with 2 Chainz, “Breakfast,” which, to be blunt, sounds like the pained screeches of a hodgepodge of dying animals.  Now there’s her newest single “Go Hard (La.La.La),” which, as the title implies, is a beautifully composed, introspective cut of musical genius.  No I’m kidding.  It’s actually the musical equivalent of a sugar overdose, a bubble-gum electro-pop song with nothing going for it other than being a bubble-gum electro-pop song.  It’s obvious that Kreayshawn wants to have a semi-popular single rumbling throughout the airwaves by the time her album Somethin’ Bout Kreay drops Mid-August.  And unfortunately, “Go Hard” might succeed in doing just that.

One thing you’ll notice immediately about “Go Hard” is that Kreayshawn actually sings in the chorus.  Another thing you’ll notice is that her singing is much like her rapping; in both cases it’s really more like talking.  Still, it comes off as sounding half-decent, especially with the squelchy, clunky synthesizers shuffling around the never-ending string of lalala’s.  In fact the chorus is actually catchy, which is a significant problem for people who aren’t Kreayshawn fans.  If you aren’t a Kreayshawn fan and don’t want vapid one-liners stuck in your head for days, then I beg you to stay away from this song.  However, if you are a fan of Kreayshawn, or if you’re a fan of nonsensical guilty pleasure pop tracks, then by all means hit play.  Odds are “Go Hard” may find itself a home in your iTunes library.  As for me, I’ll stay away from this one.