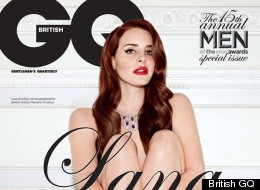 Lana Del Rey bares all, both figuratively and literally, in the new issue of British GQ. Accepting the title of British GQ’s “Woman of the Year”, Del Rey poses nude for a photo shoot and gives a tell all interview. Lana Del Rey, pop singer from New York City who made waves with her recent album Born to Die, discusses her teenage life as Lizzy Grant. She grew up in Lake Placid, NY, and admits that she was a heavy drinker at the age of 14.

“I was a big drinker at the time. I would drink every day,” she told the magazine, according to Glamour. “I would drink alone. I thought the whole concept was so f**king cool. A great deal of what I wrote on ‘Born To Die’ is about these wilderness years. My parents were worried, I was worried. I knew it was a problem when I liked it more than I liked doing anything else. I was like, ‘I’m f–ked. I am totally f–ked’.” (Via the Huffington Post)

We are glad that Lana Del Rey has cleaned up her act, and if it’s any consolation for a troubled childhood, Born to Die is a stellar, emotionally gripping album that reflects her troubled past.