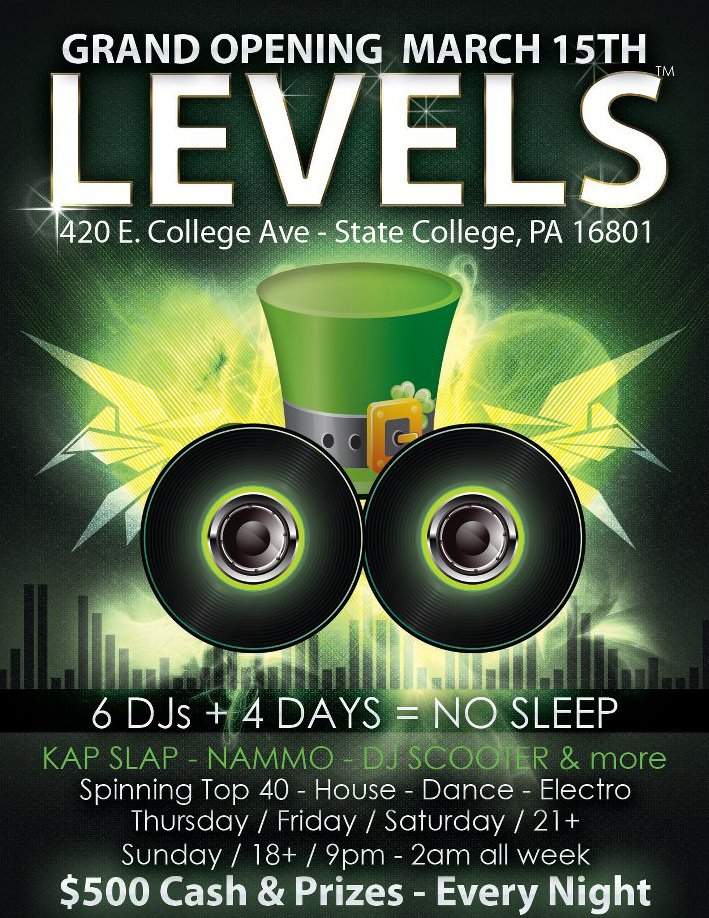 After months of anticipation, the newest, largest, and most talked about nightclub in State College will kickoff St. Patrick’s Day weekend with a grand opening party on March 15th at 9 p.m. Levels nightclub will host six world-renowned DJs over the course of four days including Kap Slap, Nammo, DJ Scooter, DJ HotLinh and will give away $500 in cash and prizes every night. One of the prizes up for grabs is an exclusive highlysought after Levels Platinum card. Levels debuted their loyalty Platinum cards two weeks ago; the ultra-exclusive VIP cards sold out in just 24-hours. Due to the high demand, Levels released ten more for sale that sold out within one hour Tuesday afternoon. The Levels Platinum card is only available to 100 members and is valued at $250. Good through December 31st, this premiere card guarantees:

Levels will not only be the hottest nightspot in town, they will redefine entertainment
on College Avenue featuring a variety of music including house, top 40, electronic,
dance, live performances, and internationally known DJs. Levels will astound audiences
with their remodeled VIP tables, state of the art 3D projection systems, a dazzling laser
light system, three full-service bars, four separate levels and will provide customers with
convenient VIP parking.

Adding to the spectacular list of features, Levels is the only nightclub within 60
miles that offers full bottle service. They will also be tempting taste buds with a decadent
food menu with gourmet pizza, oversized sandwiches and homemade desserts. Thursday,
Friday, and Saturday nights will cater to the mature crowd while Sunday night will
be open to 18 and up. The Levels staff has worked with artists and celebrities from Katy
Perry to Jay-Z.

With almost 10,000 square feet of breathtaking décor, the high-energy atmosphere
of Levels will revolutionize nightlife in Happy Valley. The newly restructured club is
the perfect place for casual drinks on a Friday night or a private venue for a celebration.
Located in the heart of Penn State’s eclectic community, Levels is the first nightclub of
its kind entertaining guests with the ultimate nightlife experience. For more information
on Levels nightclub, visit them on Facebook at “Levels Nightclub”, on Twitter
@LevelsBar, or on the web at “http://www.levelsnightclub.com”.