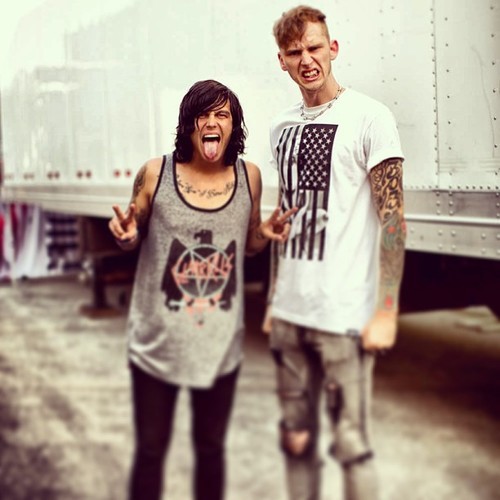 Two of the industry’s finest musicians, Machine Gun Kelly and Sleeping With Sirens frontman Kellin Quinn, have come together to bring us an intensely inspirational song that kills it on every level.

Despite MGK’s massive hip-hop success, he has remained ever-loyal to his Warped Tour roots. He has used an original song by Rise Against, titled “Swing Life Away”, as a blueprint and then remixed it to create a totally new song that tells his personal story. You may have heard the audio track when it was first released a few months ago on his Black Flag mixtape, but now  the music video that accompanies the track is out and they nailed it with this one.

Kellin’s voice soars as he belts an unshakeable chorus and emotion pours from MGK’s lyrical verses. This song carries a huge presence. It makes you want to get up from whatever you are doing and go make something of yourself. Its immense, epic, massive; it’s brilliant to say the least.

I love musical mash-ups, Machine Gun Kelly, Kellin Quinn  and the original song, “Swing Live Away” by Rise Against all individually, so as you can imagine, this remix project was like a musical dream come true for me. However, not all fans are loving this cover.

Some fans of each individual party are upset about this seemingly unexpected mash-up of musical artistry, stating that the other parties are degrading the musical talent of their chosen party.

I strongly disagree with the pessimistic views of these fans. The individual musicians have temporarily brought the absolute best of their talents together to produce one immensely creative remix. I hope that more artists jump on board and begin creating mash-ups like this one.  It encapsulates an alternative view of the music industry and promotes the musical diversity and creativity of all artists involved.

When the audio for this song was first released I had it on repeat for weeks and now that the video is out, I am sure it will be much of the same. I could literally listen to this song for days. It is guaranteed to induce goosebumps. But don’t take my word for it; check out the video below and form an opinion for yourself. Also, think about what artists you would love to see working together on a cover of your favorite song.