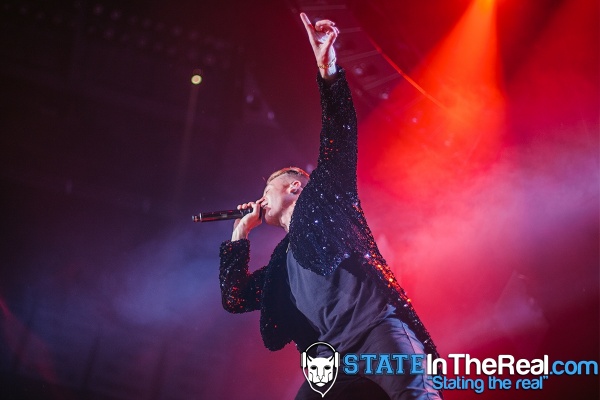 It was one of the first State In The Real meetings of the Fall 2012 semester when I first heard about Macklemore. We did an icebreaker where we had to submit a song to one of the officers and the next meeting we played them  and tried to guess who submitted what song. Mike Renahan submitted Macklemore’s “Ten Thousand Hours” as The Heist had just been released and from that moment on I researched everything I could find out about Macklemore.

I am by no means a hip-hop person so to speak. But I’m the type of person who can appreciate good music when I hear it, regardless of genre and Macklemore has that indescribable spark. I fell in love with his entire discography, but I strongly believe The Heist was absolutely one of the best albums to drop in 2012.

The first time I saw Macklemore live was in May at Skate and Surf 2013. Despite the malfunctions of Skate and Surf as a whole, Macklemore put on one of my favorite sets of the entire festival. I thought that said a lot about the fact that my favorite act from a festival that comprised mostly of the pop punk, alternative rock bands that I love, was indeed a rapper. From then on, my appreciation for Macklemore grew even more.

Fast-forward to June 2013 and the Bryce Jordan Center announced Macklemore & Ryan Lewis’s World Tour would be hitting University Park. I couldn’t believe it and knew this show would be one I couldn’t miss.

Now to present times. November 7th, 2013 at 6:30 p.m. the doors open and the Bryce Jordan Center began to fill. This was my first full on hip-hop show I’ve ever attended, and I had no idea what to expect. I’m used to full band performances, with a lot of crowd surfing, and a lot of angry pop punk pointing.  Sitting from my section of 124 and taking a birds eye view of the floor, I could quickly tell I was out of my element.

The first opener of the night took the stage around 7:30. Big K.R.I.T. a Mississippi native, started the night and from what I could tell, people were excited just to get the night started. Personally, Big K.R.I.T. was a little too hip-hop for my taste. At one point, I could literally feel the bass in my throat leaving me uncomfortably unable to breathe.

I couldn’t really get into his set, but one of my favorite songs he did perform was “Hometown Heroes”.  Before starting the song, Big K.R.I.T explained to the crowd how blessed he’s been to go out on tour especially with Macklemore. By performing in other cities and towns outside his home of Mississippi, Big K.R.I.T. feels like a hometown hero and enjoys that he’s making a name for himself.  It was a truly beautiful moment in the BJC when Big K.R.I.T. asked the crowd to put up their phones or lighters to conclude his set. 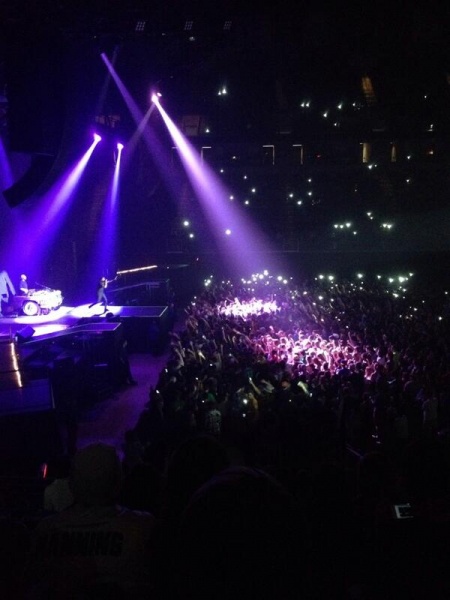 Next up was Talib Kweli. Anyone who starts their set with a remix to “Zombie Nation” can expect to win over any Penn State crowd.  Talib Kweli did just that and the moment he stepped out on stage was absolutely electric. The level of energy in the BJC multiplied when his set began. 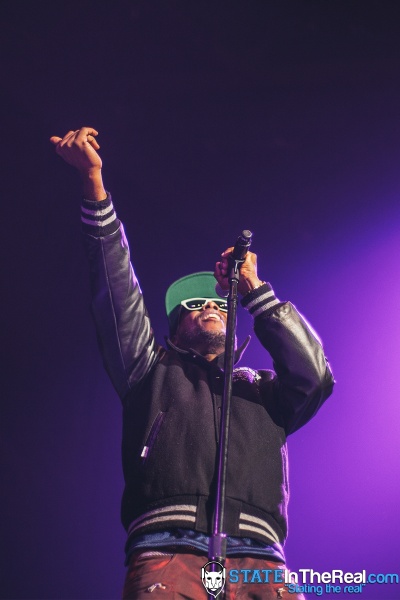 I have never seen someone with so much stage presence and energy. Watching him was such an experience and he definitely gained a new fan out of me.  He truly commanded the entire arena flawlessly and it was just so fun to watch him. 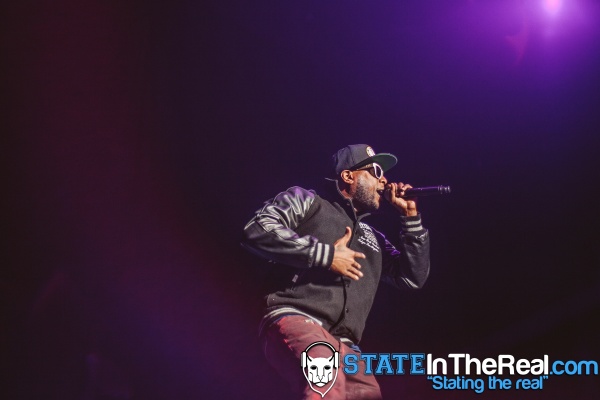 One of my favorite moments from the set was when Talib Kweli brought out friend and indie soul artist Res during his set. Res, a Philadelphia native, walked out on stage and said it best, “I should have went to Penn State, I went to Temple but I should have came to Penn State.”

I always enjoy seeing female vocalists breaking the norm. I think that’s why Hayley Williams from Paramore holds such a special place in my heart. It takes guts to pick up a mic in the hip-hop genre just as it is in the punk genre and be female, so I respect that. The two did a couple duets, including a remix on the Beetles “Eleanor Rigby” which was by far my favorite number of the night. Talib Kweli’s set concluded and the Bryce Jordan Center was getting ansty to pop some tags.

What’s nice about hip-hop shows, and something I wasn’t used to, was the lack of load in and load out between sets. It was nice to be able to transition easily between artists and only really having to switch out a few pieces of the set. I thought the stage crew executed it extremely well for the show and kept things moving nicely.

Before we knew it, Macklemore’s set was upon us. An instrumental song from his latest release The Heist titled “Bombom” began playing as the curtain rose revealing a full band and Ryan Lewis behind the disc jockey table. That’s one of my favorite elements about a live Macklemore show. It isn’t just him, a loop track, and a mic. He intricately incorporates trumpets, cellos, violins, and keyboards, in addition to Ryan Lewis’ incredible beats. 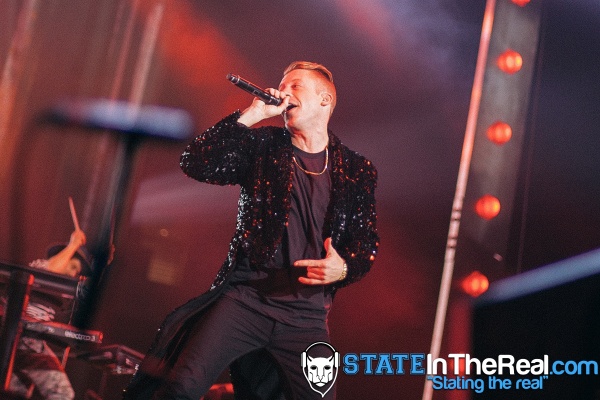 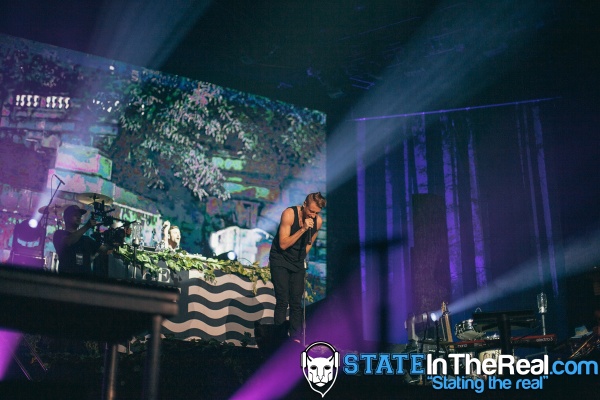 For being a headliner, Macklemore surprisingly only played ten songs, and three in his encore. This strikes me as a little odd but Macklemore spends a lot of time connecting with his audience and I personally think that says a lot about him not only as a performer but as a person. He tells his story about his struggle with substance abuse, and how he’s been sober since 2008. He tells jokes. He sincerely smiles and takes in the moment. His fame literally happened over night, and I don’t think it’s gone to his head at all. He remains so humble as he performs for full arenas and that’s what’s so special about seeing a Macklemore concert.

Macklemore performed all the hits including “Thrift Shop”, “Can’t Hold Us”,  “Same Love”, “Other Side”, “Irish Celebration”, and “White Walls” just to name a few. Confetti shot from cannons. Streamers flew from the sky. Fireworks lit up the BJC.   And in the words of Macklemore himself: “And we danced, and we cried, and we laughed and had a really really, really good time.”

All in all, the only thing I can say after that concert is this: if the chance ever arises where you can see Macklemore live, do it. Don’t second-guess it. Just do it. Whether you’re a rap fan or not or whether you only know the lyrics to “Thrift Shop”, see him live. It’s an indescribable experience, and well worth every penny spent. This was absolutely one of the best concerts I’ve seen the BJC put on yet, and for that, I tip my hat off to them.  Another great night of music put in the books for Penn State. I give this concert a grade A, without a doubt. Until next time Penn State…keep it real.