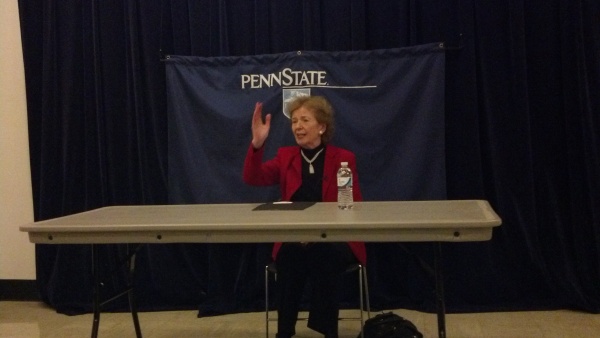 Yesterday, Mary Robinson, the first woman president of Ireland, came to speak at Penn State in Eisenhower Auditorium. While delivering her speech, called “The Future of Ethical Leadership in a Global Society,” Mrs. Robinson wanted to inspire young people. Though she has often been an advocate and a symbol for women around the world, Mrs. Robinson said, “Everyone can make a difference…I wanted [my memoirs, Everybody Matters: My Life Giving Voice] to be very much an encouraging story, and I want to do this tonight for young men and women: inspire them.” She believes that everyone has a personal duty to their community, and that there are issues in this world that can be solved if everyone, young people especially, get involved.

Mary Robinson started her speech by talked about growing up in Ireland in the late 40’s and 50’s, where “women knew their place: it was in the home, unless you were lucky.” Having four brothers, both of her parents wanted to make it clear that she would make a difference. After briefly considering being a nun, Mrs. Robinson went on to study law at Dublin College and Harvard University. During her time in the US, she saw that young people were making a difference, as opposed to Ireland, where she said that most people waited until their 30’s or 40’s to do something. Before then, they were still dictated by adults.

After being elected to the Senate in Ireland at the age of 25, Mrs. Robinson faced backlash on some of the bills she tried to pass, even receiving criticism from the Pope himself. But she carried on. “If you really feel strongly about something, be prepared to pay a price. Be prepared to be unpopular.” Mary Robinson continued, making sure that she was the best leader she could be, while upholding a standard of ethics.

After twenty years on the Senate, Mrs. Robinson was given a chance to run for president by a worker’s party. While having good relations with the party, she wanted originally wasn’t sure if she wanted to run at all. She decided that if she was going to run, it would be as an independent, with support from multiple smaller parties. After making the decision to campaign, many bookies were giving her a 100 to 1 chance of winning the election. But despite all the opposition, Mary Robinson was elected president of Ireland in 1990, and went on to serve a seven year term. She didn’t stop there, either. Mrs. Robinson resigned as president a few months early to serve as the United Nations’ High Commissioner for Human Rights for five years.

In addition to encouraging women’s and ethical leadership, Mrs. Robinson spends much of her time now focusing on the Mary Robinson Foundation – Climate Justice (MRFCJ). This foundation is meant to “create a human centered approach to climate chance.” But she’s not leaving behind her old goals either. “At the moment, environmental energy is still very male oriented.” She wants to promote human centered, ethical, smart changes and efforts when it comes to the environment, even if it’s as simple as reducing, reusing, and recycling.

In a day and age where the world is so connected, Mary Robinson says that “[young people] have an excellent opportunity to learn about the world…Now it’s very possible to make a difference.” If there’s one thing she wants everyone take away from her speech, it’s that “I’d like everyone listening this evening to feel encouraged that they can make a difference.”

Thank you to the Student Programming Association, Schreyer Honors College, and the Presidential Leadership Academy for hosting and sponsoring such a great event, and thank you to Mrs. Robinson for inspiring all who attended.