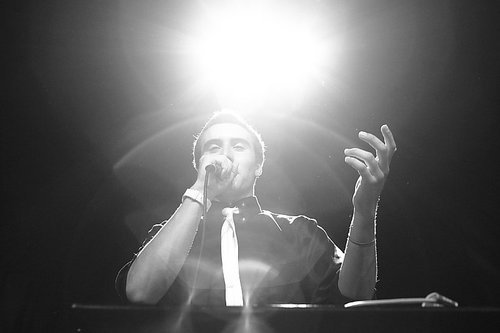 Kaz, aka Doug Fraley, is a sophomore finance major here at Penn State. He originates from Pittsburgh and began playing drums at a young age, which spurred his interest in a variety of genres, from jazz to metal and electronica.  While ascending to the district’s top jazz band, Doug began to experiment with Fruity Loops music software, with which he produced pop and rap tracks for other local musicians.  As these musicians lost interest, Doug began to experiment in more creative electronic and EDM style genres, and Kaz was born. Check out our interview with him below and check out his Youtube channel, his SoundCloud, and give him a follow on Twitter!

How would you describe your musical background?

Rhythmic with an early start in songwriting.  The only instrument I’ve really dug into is drums – jazz, metal, latin, funk, lots of stuff.  But back in school I learned to play (basic) guitar then bass for battle of the bands.  I messed around on a keyboard a bit too.  Even with rudimentary melodic experience I was always a big creative contributor; I’d write or help write a lot of the songs even when I was just the drummer.

How would you describe your overall sound as a musician?

Unpredictable.  I’d love to have like a flute, gated choir, dubstep bass, and rap drums together, but in a way that builds up to something structured and musical.  Taking the best elements from different styles and using them in a way that they all prop each other up is a definite goal.

Which do you enjoy doing more, originals or remixes?

I love both, but recently I’ve been digging remixes.  I think it’s really cool to see a vocal track get chopped, repitched, and morphed into a banger dance tune or a down-tempo electronic groove.

Also Quentin Tarantino. He’s a master of bringing wacky elements together in a thematic way, which makes for such unique films.  Pop songs in samurai fights, surf music in mob flicks, all that stuff.

Who is your favorite DJ/Producer today?

Recently, Adventure Club.  They have some great remixes where they’ll take an Indie vocal and morph it into a heavy but musical dubstep song. His Pittsburgh set killed, he had some really crazy mixes and obscure songs.

What has been your most enjoyable live performance?

M83. They would have songs where three of them would be playing synths, 2 of whom were also singing in harmony, and it would build up to the end with a guitar and saxophone jam.  A lot of diverse sounds and power.  They do a lot with mixing electronic and more traditional sounds live.

I don’t plan much ahead of time.  I usually just pick a sound and start messing around with a mini keyboard.  Eventually I’ll get some chords or a melody I like.  Then I’ll add percussion or another instrument/sound. I try to be creative and choose some wacky instrument combinations. Like an oboe, 808 bass, and a plucky synth for example.  I might do this 10 times until I get something I really like, and then I’ll just keeping building on it.  I haven’t recorded recently, but I generally use a condenser mic and have the vocalist just do a few takes.  I try to get as much as possible in one good take, and fill in weak parts with other takes.  In my limited experience, I felt the song would lose momentum if the vocalist punched in too much.

If you had to choose your favorite song you’ve ever written, what would it be and why?

I’m always biased towards my newest stuff, so I’d have to say the Make It Work remix (orig. Young Fame & 2 Chainz).  That was my first go at trap music, and I really loved it because of the impact of the heavy 808 with the ominous phasey synth.  Plus Young Fame retweeted the remix, which I was stoked about.

What do you see in the future for yourself as a musician, in terms of goals?

My one overarching goal is to make music for a living, and not be confined to a specific sound or genre.  And to collaborate with a lot of different artists.  Short term, I want to improve my DJ/mixing capabilities.  I love jazz because it is a completely improvisational genre.  Being able to translate that sporadic live energy across my original electronic compositions is a huge personal goal.

Lana Del Rey.  Her voice is incredible and her songs create such a melancholy mood, it would be awesome to be involved in that writing process and see what comes out in a different, combined work.

Keep experimenting and listening to new stuff.  I always want to write, get feedback, and hear others’ work.  Music is all about connecting with others and conveying a sense or emotion.  With Spotify and a million music blogs out there, it’s so easy to find great creative music which I think is incredible.