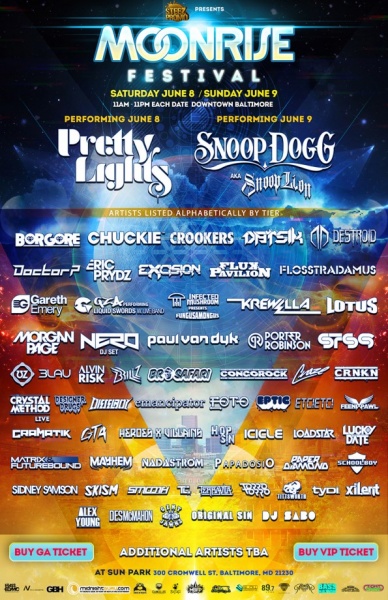 The Baltimore, MD EDM festival Moonrise has been cancelled. They made a post on their website yesterday, saying that the festival had been cancelled 3 weeks prior to the event date because they were not able to receive the final permit allowing them to host the event. Anyone who bought a ticket can get a refund from Ticketfly or the venue that they purchased their ticket from. You can read the full post here.

The two-day festival was originally supposed to include a number of big name acts in their line-up such as Pretty Lights, Snoop Dogg (Lion), Borgore, Datsik, Doctor P, Excision, Flux Pavilion, Flosstradamus, and Krewalla. The event’s creators said that they are trying to hold smaller events in the surrounding areas hosting some of the events originally booked for the festival. Check back on their website for information about possible upcoming shows.