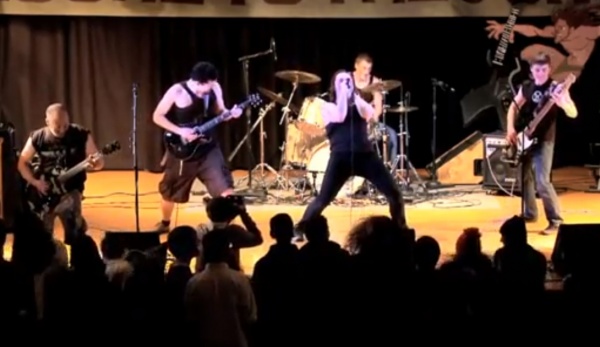 Dark Tower are a heavy metal band from State College, PA and will be competing this Saturday, March 23rd at this year’s Movin’ On Battle Of The Bands. Dark Tower consists of Simon Cantu (guitar), Hunter Rauch (bass), Jasen Giustazzi (guitar), Carter Freije (drums), and Sam Christensen (vocals). Simon and Hunter are students of Penn State, giving Dark Tower eligibility to compete in this year’s Battle for an opening spot at the 2013 Movin’ On festival (featuring MGMT, Brand New, Gloriana, Big Boi, and Kids These Days).

Formed by five students while attending State High, Dark Tower is currently strengthening their repertoire as a band by working on covers, originals, and getting live gigs in the area. Influenced not only by the classic metal pioneers (Iron Maiden, Judas Priest, Black Sabbath) but by heavier, more sinister acts (Death, Slayer), Dark Tower aim to shred the face off anyone who attends their shows. At the upcoming battle of the bands, the crowd can expect a whirlwind of rampant yet refined guitar solos, mixed with frontman Sam Christensen’s growls, howls, and wild stage antics. Check out the video below to see a live performance, where the band tackles “Crystal Mountain” by Death and then plays an original, “Soul Destroyer.”

Check out their Facebook page for more updates. Metal.