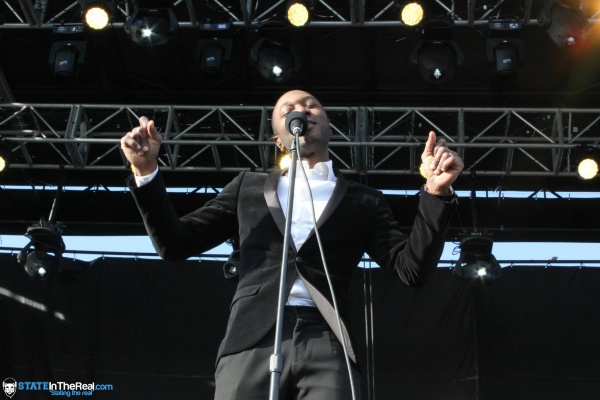 After his soulful performance at Movin’ On last Saturday, we can all agree that Aloe Blacc is most certainly The Man. He is a master showman with a voice just as smooth and powerful live as on recording.

Blacc opened his set with “I Need a Dollar”, his first hit from early 2010. Blacc, here to have fun, then remixed his own song by singing it in a grooving reggae style. Blacc instantly got his audience engaged and he held our attention the rest of his 45 minute set.

The cheers of excitement from the audience were enormous for both “Wake Me Up” and “The Man”, and you could here “Aloe, Aloe!” being chanted half way through the set. Audience participation was a key part of Aloe Blacc’s set. Not only did he have us singing along, but he had the audience in two-part harmony during “Love is the Answer”.  Blacc then jokingly reminded us that when he says “Love is the answer”, he doesn’t mean for us to put “love” down for every answer on our final exams.

The audience participation did not stop there. During the extended chorus of “You Make Me Smile”, Blacc instructed us to grab on to the special someone who makes us smile and sing the chorus to them. “And if you see someone who’s not hugging someone”, continued Blacc, “Go sing to them.” During “Can You Do This?”, Blacc told us of watching Soul Train as a child, and instructed us to form two aisles for bold audience members to dance down. The audience obliged without hesitation. 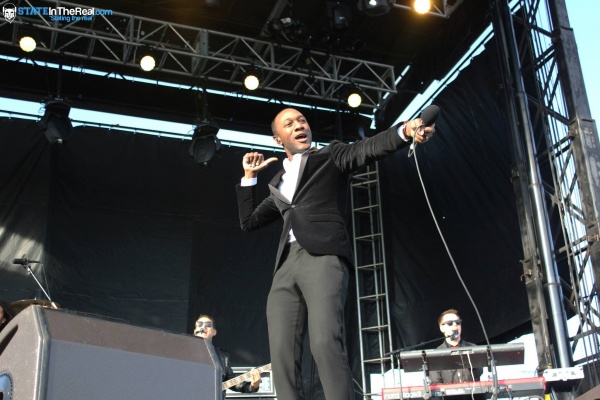 Aloe Blacc encouraging the audience to sing along

Aloe Blacc was kind and humble throughout his performance. He credited other artists for their work on his songs and openly confessed the great honor it was to work with them. He gushed about working with Pharell Williams on “Love Is the Answer”,  Avicii and Mike Einziger of Incubus on “Wake Me Up” and Elton John on “The Man.”  He also expressed his gratitude for being able to perform music that makes people smile.

Near the end of his set, Aloe Blacc had us all raise our hands high. He preached love and we responded, promising our master of ceremonies that we will go out and make the world a better place.

On behalf of State in the Real and the student body, I want to thank UPAC and everyone involved in Movin’ On for booking such a talented and uplifting performer.