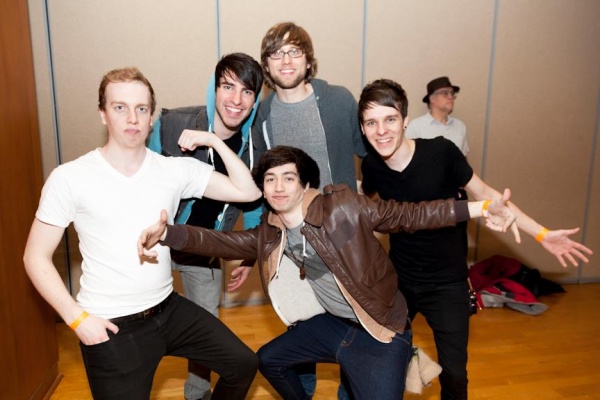 Automatic Habit, the 5-piece Pop-Rock band from Philadelphia, and one of two winners of this year’s Movin’ On Battle Of The Band’s, are beyond excited to be playing this year’s Movin’ On 2013 Music Festival, the largest student-run festival in the country. By winning this year’s Battle Of The Bands, they earned an opening spot at this year’s festival featuring MGMT, Brand New, Gloriana, Big Boi, and Kids These Days. The band is comprised of Bill Alexander (Bass, and current Penn State Abington Senior), Johnny Costa (Vocals), Jake Sciscio (Guitar),  Bruce Wiegner (Lead Guitar/Vocals), Joey Wooliver (Drums).

Automatic Habit as a whole have been playing music together since 2012, and quickly became a staple in the Philadelphia music scene. The guys are so fun and outgoing, and it’s easy to see that they love what they’re doing when they perform. Their personalities easily shine each and every time they step out on stage. The band strives to create their own sound, while picking up many Pop-Rock and Punk sounds. Their influences include Fall Out Boy, Hit The Lights, Paramore, and many more.

State In The Real (SITR) got the chance to talk with vocalist Johnny and lead guitarist Bruce before they make the road trip up to State this Friday.

Continue reading to find out what it was like for Automatic Habit (AH) to win Battle, what they’re most looking forward to at the festival, their plans as a band, and much more!

SITR: Could you please introduce yourself and tell the readers a little bit about yourself?

AH: Hello readers, we are Automatic Habit, a Pop-Rock band from Philadelphia!

SITR: What made you decide to enroll in this year’s Battle of the Bands?

AH: When we saw that we could have the opportunity to play with such incredible acts, because Bill goes to Penn State Abington, it was kind of unanimous. We figured we might as well give it a shot!

SITR: How was the Battle of the Bands experience?

AH: We had a ton of fun at the Battle despite all the technical problems we had during our set. If you were there, you got to see our guitarist Jake do a sweet air guitar solo. Everyone was super congenial and supportive.

SITR: What was it like when you first found out you were playing at Movin’ On?

AH: We were all shocked. Just kind of like “Did we really just get the opportunity to open for Brand New & MGMT!?” Lots of high fives and hugs.

SITR: What are you most excited for at Movin’ On, the largest student-run festival in the country?

AH: I think, collectively, we’re most excited just to share the stage with such amazing acts…and to see what Big Boi’s fur coat situation is like these days.

SITR: Who are you most stoked to see at Movin’ On?

AH: Definitely Brand New. They had a huge influence on most of us growing up. They are a band we would go and see if we ever had the opportunity so the fact that we get to open for them is simply incredible.

SITR: If you could record a song with any of the Movin On’ acts, who would it be and why?

AH: Again, I think the obvious choice for us would be Brand New. They were such a huge influence on all of us growing up and it would be incredible to work with guys who made such an impact on our lives.

SITR: Speaking of recording, ya’ll just got done recording with John Naclerio and Ace Enders, what was that experience like?

AH: It was pretty amazing. John has worked on some great records so we knew going in it was going to be a great experience. He pushed us to make everything as tight as possible and really challenged us as musicians. I know all of us walked out of his studio with a lot more knowledge about our instruments. Working with Ace was such a great decision. He sat us down and had Johnny go through the vocals right in front of him to really feel out the songs. His input and outlook of songwriting and mindset during the process really opened our eyes and we definitely want to work with him again in the future.

SITR: What are your plans for the summer, musically and otherwise?

AH: We really just want this band to be our lives. As far as summer plans go, we’re still working some of that stuff out. But we’re in a great spot right now and we’re so stoked for these upcoming months!

SITR: How long have you been into music and playing instruments?

AH: We all have been playing music for the majority of our lives whether it was for elementary orchestra, etc. We all started to play in bands during high school and continued through to college.

SITR: How supportive are your friends and family of Automatic Habit?

AH: We have THE most supportive family and friends anyone could ever ask for. Without them, we would probably cease to exist. So we seriously owe so much to our support system. Special shout out to Mama and Pops Wiegner for letting us be loud in your basement and eat all your food. We love you.

SITR: What is your favorite memory of Automatic Habit thus far?

AH: Playing a sold out show in Knoxville, Tennessee. Our buds in On My Honor really hooked us up with an amazing show.

AH: Collectively, I think we could all agree on the sanctuary that is Wawa.

SITR: Who of the band is most likely to stage dive?

SITR: Finally, when you think of Penn State, what comes to mind?

AH: Community. After all the events that happened and how the school still stuck together and continued on with the same school spirit was really inspiring. You didn’t let one bad apple ruin everything and showed that by raising over 12 million dollars for the fight against pediatric cancer. If that isn’t an amazing community, then we don’t know what it is.

SITR: Any last words for our readers?
AH: Thanks so much for your time!
You can check us out at:

Thanks again Automatic Habit! Movin’ On 2013, State In The Real, and Penn State are so excited to have Automatic Habit perform in this year’s Movin’ On 2013 music festival and we hope you are too! Check out two of their latest singles, “This Is Misery” and “Play It Again” below and come out Friday, April 26th at 3:35 pm at IM Field West to catch their set and hang with the guys! 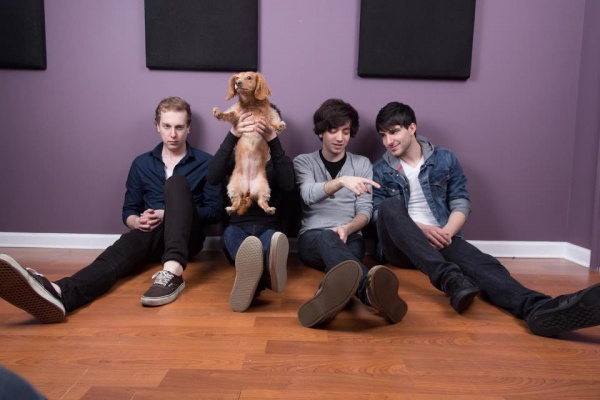