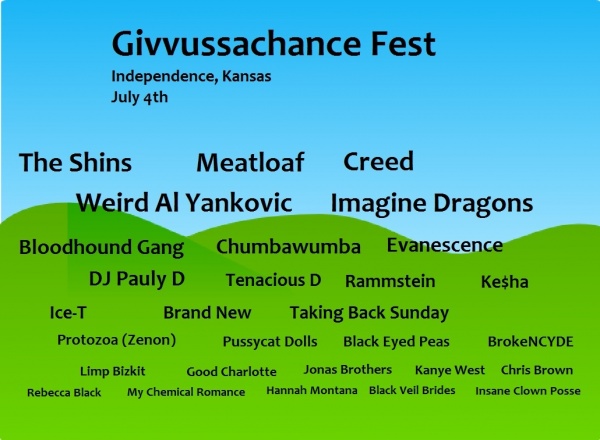 There’s a new music fest in Kansas that just announced it’s line up today. Their name seems like they really want you to give them a chance, since this is the first year the festival is taking place. They have some pretty big names in their line up, whether good or bad. This line up seems to include such awesome names as The Shins, Imagine Dragons, Brand New, and Tenacious D, while including such questionable names as Creed, Chumbawumba, Evanescence, Pussycat Dolls, The Jonas Brothers and Chris Brown. Rebecca Black is even making an appearance to perform her song “Friday” as a joke, followed by a new song. While we’re not sure where they got the money to make this festival possible, it’ll certainly make for an….interesting experience. Make sure to check back for more updates on the Givvussachance Fest on July 4th in Independence, Kansas.