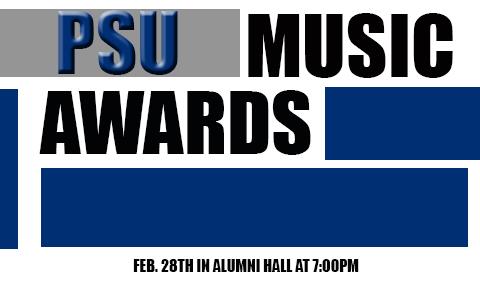 Open MIC Penn State is proud to announce their second annual Penn State Music Awards for the school year of 2013-2014! This event will be held on February 20th at 7pm in Heritage Hall for the price of $10.50 a ticket. Which is so worth it once you hear what this event has to offer!
Last year’s Music Awards were a huge success with a performance from Big K.R.I.T. and Mike Wallz winning Artist of the Year! This year Open MIC Penn State plans to bring in another R&B artist, to be announced, as well as showcase student performances from Julie Bouchard, Mariam Moujieh, Oxygen Pernell, Paul Louigene and Brisa The Poet!
The award show is currently accepting nominations for their many categories ranging from best dance group, best acoustic performer, best acapella group, to artist of the year! The winners will have their names announces by some Penn State “Celebrities”, receive a trophy and gain bragging rights for a whole year!
Their voting process is simple with open nominations that will be available to the public until January 24th and a link is available below. Once the nominations are tallied, a voting process will begin on January 26th with the top nominees competing for the various titles. The votes are then reviewed by a panel of students and faculty and then the winners are selected!
Please take a moment to nominate some talented penn state students and we look forward to seeing you all dressed to impress on February 20th!