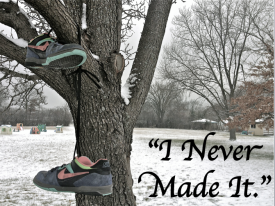 Not many Penn State students can say that they spent their holiday break shooting music videos in Chicago, but local rapper Malik LRB did just that. He’s been working relentlessly on new material, and plans to debut a new video at least once a week. Starting now.

Today, he graces us all with his newest work, the hard-hitting hip-hop record “I Never Made It.” Both the song and video were created during his stay in Chicago, and the entire project was completed in just 72 hours. Though “I Never Made It” is a bit deeper than his fans and followers are used to, there’s some real motive behind the track and video.

What “I Never Made It” covers is youthful negligence, which is shown through the older brother’s actions in the music video. Malik used the visuals as a way to pinpoint this concept with a more specific example, the scenario of drunk driving on New Year’s Eve. However, he says it’s more about the broad meaning.

“Mainly what I was trying to get across was how this, as I explained in the song, is an ‘epidemic taking over the globe,’ and how it’s really spreading to the youth,” Malik said.

And he certainly brings his message across, unleashing razor sharp verses over the crisp and melancholy hip-hop beat. Singer Ashleigh Munn fashions a fantastic hook, her voice beautiful and haunting as she sings sorrow and regret. All in all, “I Never Made It” exhibits the vivacity in which LRB is tackling the incoming year, and shows promise for his further releases in the months to come.

Make sure to pick up the free mp3 on his SoundCloud here!