Chris Will
Music, Penn State News Reviews and Interviews
Comments Off on Penn State Rapper LRB Gets Personal In His Hard-Hitting Record "Walls" 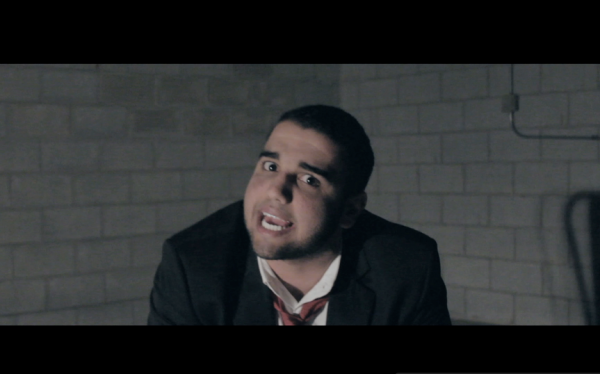 A truly potent record, artistic and relatable, takes well-timed synchronization and insurmountable talent. Each piece has to melt together into a single, cohesive product. Penn State rapper LRB has spent the past several months establishing and re-establishing his musical vision and image, taking his fans and listeners through his many facets as a musician. Tonight, he drops a massive hip hop track, one that represents the apex of several unbelievably gifted individuals’ work. The record is dubbed “Walls,” and its raw message is only one of its many notable qualities. This is a side to LRB that we as his audience haven’t experienced, and it adds an entirely new dimension to his budding musical career.

Don Coda’s deft hand as a producer becomes apparent from the first few seconds of “Walls.” Jabbing violins and skittering keys establish the high tension in the track from the get-go, and as Marka’s powerful hook cuts through the terse heartbeat percussion, the theme of the track begins to come into focus. LRB further cements his message as he hits the ground running in the first verse, flexing his muscular flow and pushing his bars straight to the heart. “Walls” calls to those times where life’s pressures weigh down too heavily, when it seems like the walls are closing in on you. It highlights those widespread insecurities we all feel, yet does so with a tone that suggests that these doubts should be overcome, not wallowed in.

Miles Cable (FreshView), who’s directed some of LRB’s past work, really outdoes himself with this music video. Fast cuts and dramatic angles drive home the power of the record, and the simple yet bleak environment parallels the song’s emotional burden.

LRB gave us some great insight to “Walls,” so check out our interview with him below!

So you mentioned in our last interview that your plan was to alternate light hearted and fun records with serious records. What made you decide to drop “Walls” as your third track release?

LRB: We picked “I Never Made It” as our original release because we tried to make an impact with New Years. In terms of why we picked “Walls” next, we already had in place where we wanted the other videos to drop, and all were at specific times. We wanted “Walls” to get out right after we made it. I was sitting with Miles and when he showed he the video I just yelled “WHAT DID YOU JUST DO?!” I thought it was the best video out of all of them in terms of professionalism and quality. We definitely wanted to get it out ASAP because we were so excited about it

How did “Walls” come into fruition?

LRB: I actually wrote this song over a year ago, freshman year at Penn State. I was going through a funk, a sad time. I didn’t wanna go to class, leave my room, do anything. That was definitely a hard time for me. I remember sitting in my bed, hours on end, and I didn’t want to leave. And I actually wrote this one before I heard the instrumental. When I heard Don’s and Marka’s part I was like, they fit perfectly! I found the instrumental, and then from there, we recorded it the summer out in New York with One Love. And then we kind of just had it sitting around for a while. The cool thing about this was that when I wrote it, I had a video in mind. I was thinking I didn’t want to just make this a song; I wanted to make this an art piece. Overall, this was made as a project, not as just a song, not as just a video.

What makes “Walls” such a special record, and different from what you’ll hear on the radio?

LRB: I listen to a lot of underground music. One of my biggest influences is Dylan Owen; his stuff is amazing. What I love about him is that you can tell his pieces were written as poetry before they were written as songs. And I was like, “I wanna be an artist who doesn’t just make music but I want to express myself. How do I do that?” He’s really good at that. A lot of his stuff, if you just cut out the instrumental it would be a spoken piece. And that’s kind of what I was going for. There’s so much more to “Walls”, I could write it to be 19 pages. This is not Flo Rida, this is not Nicki Minaj, not that they don’t have emotion, you’re just not gonna see something like this from them.

This is a risk, I was thinking that when wrote it. People could either interpret it as crap, or they could love it. But for me, I just want to make music, people can interpret it how they want. And for me, I’m very much about my lyrics. You’ll never see me be someone who’s just going for sound and not for lyrics or whatever. And this is a lot different than my other songs. It’s really out there, it’s a risk, I don’t know how its gonna be viewed. The people who have viewed it, some like it and say it’s completely out of my element and they respect it. Other people are just like “dude its not you.”

Any hints for what’s down the road?

LRB: You can expect the same vibe, back and forth, at least for the summer. You can expect another upcoming track featuring The President too. I’m also in the process of creating a new EP for the summer as well, featuring an artist I won’t name. The EP is definitely gonna be 6 tracks. It’ll be nothing like “Walls” or “I Never Made It,” summer’s probably gonna be all upbeat stuff.

LRB: Big props to Dylan Owen in general, check him out for sure, and everyone who’s been involved in the project. Big props to Miles especially, he absolutely destroyed it, his current quality is like something that could be on VEVO. He’s getting better and better and I’m happy for him. This is the best project he’s done to date, and I’m almost scared to see what comes next because “Walls” was so good.