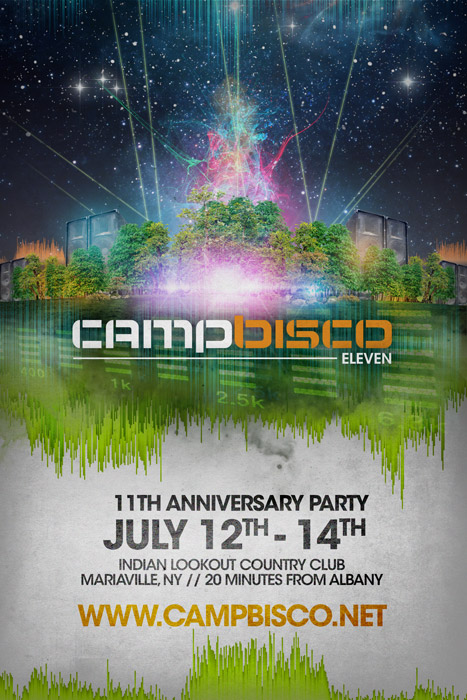 Camp Bisco is a 3 day rain-or-shine outdoor music festival held at the Indian Lookout Country Club 20 minutes from Albany, NY. Camp Bisco XI will feature 3 days and nights of music on 5 stages, including 2 side-by-side MAIN STAGES, 2 DANCE TENTS featuring top international Dance acts as well as a silent disco (silent rave) and an “up & coming.” Last year there were 25,000 people in attendance with amazing artists such as the Disco Biscuits, Pretty Lights, Wiz Khalifa, Nero, Skrillex, Bassnectar, MSTRKRFT, Wolfgang Gartner, Rusko, Orchard Lounge, Holy Ghost! and many many more. This year’s lineup comes out TOMORROW http://www.campbisco.net/! There are separate passes for parking and for RV’s. Most camp out in tents next to their car, or in an RV, but there are miles upon miles of tents of people. Music flows from the stages and tents from around 12pm to well past 3am, with incredible production and sound. There are also art installations all over the camp grounds and plenty of people dress up in costume. There are numerous vendors selling everything from hand-made jewelry to t-shirts to glass pipes. It is 3 days of pure love and music, which is something very uncommon in today’s world. The experience is truly unforgettable.

Please note that Mord Fustang is included in this lineup. He will be performing at Penn State THIS upcoming MONDAY for FREE in the HUB, courtesy of the PSU Electronic Dance Music Club.  Event post HERE!