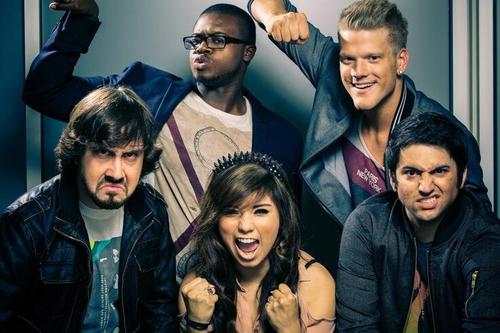 For the last few years, a-cappella seems to be the next “cool” thing in music. From Pitch Perfect to The Sing Off, America seems to have a new fascination of a-cappella, from the new and exciting ways our favorite pop songs to the incredible skill that it takes to make it sound like there are instruments when, in fact, there are none. Pentatonix, hailing from Arlington, Texas, are one of the few huge success stories from the a-cappella craze in recent years. Gaining their fame from The Sing Off, the Texas based group, now with their third studio album, aptly titled Vol. III. Including some very recent pop hit, Pentatonix absolutely kill it and make such a short album worth every minute, and make you want to go back and listen again… and again… and again.

Listening to the album, with no knowledge that they are an a-cappella group, it would take a good amount of time before you actually realize that there are no instruments. Starting off the album, they launch right into “Problem,” the song that helped to solidify Ariana Grande and Iggy Azalea as the pop stars and they 100% do the song justice. Even including Iggy Azalea’s rap part. But, the part of the album where they absolutely kill it is “La La Latch” in a mash up that is long over due, they combined Disclosure’s “Latch (feat. Sam Smith)” and Smith’s super catchy “La La La,” now I will be completely honest I have seen a lot of people attempt to cover Smith, from Charli XCX and FKA Twigs, even Vin Diesel lent his voice to covering Smith. But only Pentatonix have been able to cover the range of Smith. They destroy the song, both of them and even capture the amazing beats of Disclosure. Every song captures the energy of their covers and just do an amazing job showcasing their amazing talents.

If you want a fun new way to listen to some of your favorite pop songs, by all means pick up Vol. III as soon as possible, also if you just want to listen to something that will mix up your music playlists, then this album has you covered. Its fun, my only complaint is the length, right as I am getting into the groove of it, it ends, this is not a bad thing, I felt this way about My Name Is My Name by Pusha T, and that was one of my favorite albums of the year last year. So go check out this album, it is the perfect way to get into some amazing music before fall kicks into full swing. Also I am now super pumped for their Christmas album in October.