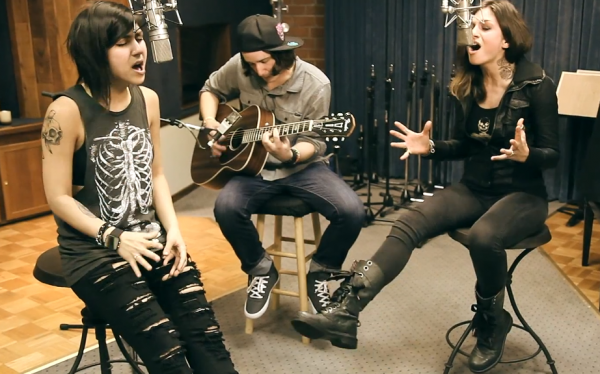 It’s hard not to think of ass-kicking electro-dub trio Krewella without thinking “party till I drop,” and for those of you who saw them tear the roof off of Levels Nightclub in April, you know that’s exactly what Jahan Yousaf, Yasmine Yousaf and Rain Man do. They’ve notched a #1 Billboard Dance Hit with their top 40 breakout “Alive,” an intimate yet mind-numbing adrenaline rush, one-part sweeping love anthem and one-part liberating house banger. And at the core of “Alive,” as with most of their tracks, Yasmine and Jahan exhibit superior vocal-work, crooning and calling with enough aggression and emotion to make even the most seasoned dance vocalists jealous. But underneath the darling sisters’ supreme, auto-tuned snarling and singing lies an interesting comparison, one that’s sometimes tempered by Rain Man’s body-slamming moombahton breakdowns, but is there none-the-less. Jahan and Yasmine frequently sing like the most ubiquitous female alt-emo vocalists of the past decade, hitting heart-wrenching heights that rival Hayley Williams, Lacey Sturm, and the like. And with the release of their acoustic rendition of “Alive,” they prove their roots more than ever (and in the best way possible). Take a listen below and swoon along with the rest of us.